Situated in a completely unexpected location is the reincarnation of the former Yoshoku-ya that lived along Denman Street downtown and was home to many fans of the homey Japanese-Western cuisine of the same name.  I was surprised to spot the bold signage trumpeting its opening on a drive along busy Boundary Road and popped in for a dinner earlier this summer.  With ample parking in a lot nearby (or on the street in front or behind in a residential area), visiting this place with a vehicle is much more easier on one’s sanity than it was back in its previous spot in Vancouver.

If you happen to walk by, the big glass windows can give you a clear sense of what to expect – a no nonsense, rather simple decor with ample spacing between tables so as not to feel overly close to strangers.  I guess when you leave the downtown core, the cost per square foot for rent drops dramatically, thus allowing a proprietor to be more generous with the elbow room, which is certainly appreciated by some.  Added to the welcoming tone is a big poster of the dishes you can find on the menu, including an array of photos of the actual plating as well.  I imagine this can come in handy for those who have no idea what is meant by the advertised yoshoku cuisine.

END_OF_DOCUMENT_TOKEN_TO_BE_REPLACED

Donkkaseu, is the Korean spelling converted into English taken from the sounds of the original Japanese word for this dish, a breaded and deep fried pork cutlet.  For many North Americans, the Japanese presentation of this served Kanto-style with a sweet tonkatsu sauce and finely sliced raw cabbage is perhaps most familiar.  (On a side note, I reckon it might be awhile before we see here in Canada, tonkatsu done the Kansai (more specifically Nagoya) way by bringing in the flavors of the more savory miso as a sauce base –  but stranger things have happened).  Though, as with several notable kinds of food in Asian cuisine, you can find different variations of a single dish made with local interpretations – across East Asia in particular); for instance la mian/ramen or kimbap/norimaki).  Hybrids even and commonly referred to as such as a standalone genre (e.g. Korean-Chinese cuisine comes to mind here) too.  This is just another example. 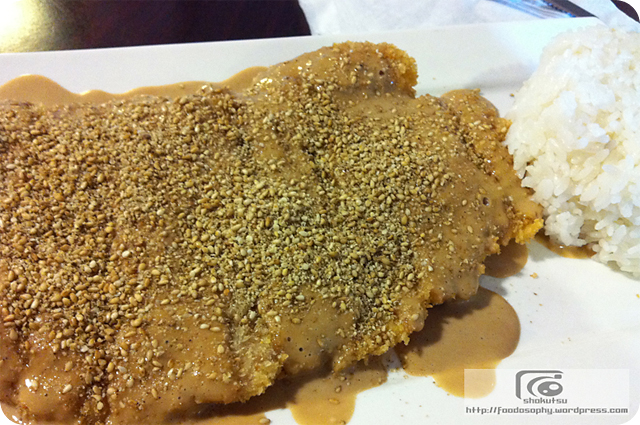 END_OF_DOCUMENT_TOKEN_TO_BE_REPLACED

Over the years, I can say I can count on one hand the number of times I’ve made it to the front of the line at a Japadog stand and ordered something to eat.  If I were to add the occasions when I saw a lineup and avoided it all together despite wanting a ‘dog and the instances when I’ve actually gotten into the queue only to give up part way through due to time (and my thorough disdain for standing in lineups), I would need all the digits on both hands and feet.  With this in mind, upon hearing that the minds behind this incredible food business success story began planning and finally were able to open the doors to their first non-cart venture, I was anxious to see what the setup would be, as well as the new menu offerings…

However, my trips to the downtown core and becoming few and far between of late, as I simply detest the traffic (the auto and human kind inclusive).  Perhaps its the slowly warming weather that’s making me testy when I have to dodge traffic on both the roads and sidewalks – as well as growing numbers of out-of-town tourists gawking at maps, suddenly stopping and pulling suitcases too if you ask me.  But in spite of these obstacles and mental anguish, I decided to bite the bullet and see if the storm of their launch had subsided somewhat, which would enable me to place and order and get my food and spend as little time as possible waiting as I could.  Choosing a sunny Saturday afternoon when other people had the same idea apparently, was what destroyed my dream of a quick in-and-out visit.

END_OF_DOCUMENT_TOKEN_TO_BE_REPLACED

[Apologies for the low quality images, just the first one was taken with a simple point & shoot digital, whereas the others were taken with my cell phone.  The setting inside with many customers in a close space was not conducive to whipping out the big DSLR.]

I wasn’t sure what to expect from Hachibei.  Long on my to-check-out list, but never quite enticing enough to warrant it rising to the top.  In a quest for some good Japanese comfort food, we finally made the short trip out to this place.  As you can see from the outside, it was fairly plain and nothing screamed at me that I would be getting a great meal.

END_OF_DOCUMENT_TOKEN_TO_BE_REPLACED

[UPDATE: As of January 2009, closed due to poor health of the head chef]

My first ever visit to this establishment was in spring 2001, and I’ve gone back many times since, and have recommended it to anyone who’s asked, “where’s a good tonkatsu (deep-fried breaded pork cutlet) place in Tokyo?”.

Clearly its one of my most favorite places to eat and its a dish I often make at home myself.  Served with sides of shredded cabbage, miso soup and steamed rice, it makes for a hearty meal, and Tenshin is clearly in a class of its own in my books.  I’ve only gone at lunchtime, but if you do, make sure to go as early as you can as the place is packed soon after the doors are opened.