My lack of enthusiasm for breakfast and brunch foods is fairly well documented, and, it seems, there are voices in the wilderness that concur. While i enjoy certain elements that make up breakfast, I just find the overall the entire meal to be unsatisfying. Instead, as i advance in years, I generally take advantage of the meal to get as much healthy stuff out of the way – fibre, fruits and veggies, dairy, so i can concentrate my remaining two meals on things i really like. Like meat. And soup. And meat. However, every once in a while, you’re reminded why breakfast can be so great. An amazing hollandaise on a perfectly poached egg, a nice fatty strip of crisp and soft bacon, bratwurst, crisp and fragrant hash browns, perfectly ripe fruit. Or, you can just have foods that take great elements from lunch and dinner and incorporate them into breakfast! Pfantastic Pannenkoek Haus does a little bit of both.

Pannenkoek is a Dutch pancake. More like a crepe than a traditional pancake, they come in two types of basic flavours – sweet, and savoury, or often served as a combination of both.  With a wide variety of different toppings, as well as the ability to customize your own, Pfanntastic Pannenkoek Haus has a little bit of something for everyone. Located in a strip mall off Crowchild Trail in SW Calgary, it is a bit difficult to get to. People heading North on Crowchild Trail have a simple turn into the complex. For people heading south, a roundabout trip through the local side streets is needed.  This small snag aside, clearly enough people know where it is, as weekends have a very very long lineup. I typically show up very early, or very late, otherwise i expect a 45 minute wait out the door.

END_OF_DOCUMENT_TOKEN_TO_BE_REPLACED

I know that Las Vegas cannot seriously be considered an accurate sample of a population, given that a good part of it that you see in public, are visitors from out of state, or out of country. For anyone who’s ever been there, you know that the availability of large quantities (and varying quality) of food in “America’s Playground” is a 24/7 proposition. Being responsible, meaning not overeating, can be a challenge with the never ending temptations from the numerous restaurants and all-you-can-eat buffets especially along Las Vegas Boulevard. And with most people staying awake for longer hours each day, it also leaves the possibility of sneaking in a few more snacks than usual. All a deadly combination for those who want to avoid gaining significant weight during a vacation.

With that in mind, on my recent trip to Sin City, I tried to keep an eye on what I was eating. For some reason, during my whole stay, I didn’t feel like having more than two meals a day – which was probably helped by my getting up a bit later each day than I usually do at home. I had in mind some potential places to eat during the time I was there, but in the end, I completely ignored my list and just ate when I was hungry, someplace close by at the time, and I tried to keep it simple and affordable. I can hear the Foodosopher groaning at me already for passing on some of his suggestions (although the Burger Bar in Mandalay Bay was shut down due to lack of power). (SMILE)

The International House of Pancakes (better known as IHOP) has been in business for fifty years and according to their website, they have 1,375 IHOP restaurants located in 49 US states, Canada and Mexico. 14 of those are in Las Vegas, and I was surprised to learn that 12 exist in British Columbia. Until this trip, I have never stepped foot in any of them. In fact my only exposure to it was probably seeing it appear in the feature film staring Sean Penn, “I am Sam”. My breakfast choices, when I even choose to have this morning meal, is usually a combination of some toast and coffee. Not since my high school days have I really had a huge appetite in the morning, and thus this bare bones combination tides me over til lunchtime. Driving up the Strip at the noon hour in search of some caffeine to start my day, I spotted the distinct sign and decided I’d make my virgin visit to the place that boasts serving up “700 million pancakes per year”.

Believing that the crepes at least would be on the lighter side, I chose something off the “international crepes” section of the menu in the Danish Fruit Crepes. I should have stopped it right there, but when asked for what topping I wanted, I looked down and said “cool strawberry”, with the warm blueberry, and the cinnamon apple being left aside. What was a light meal turned into a heavily sugar coated mess, as the strawberry compote just overwhelmed the more delicate crepes. I wish it had come in a separate pouring container rather than lathered on top by the kitchen. Add in the squirts of cream cheese, and the dollop of whipped cream, it was a sucrose bonanza that I would have preferred to have avoided.

Also at our table was the Double Blueberry Pancakes, which I had a taste of and frankly don’t see what the fuss is about. If this place is known for pancakes and this is their offering, I am puzzled by the apparent success of this franchise which uses this as their flagship dish. 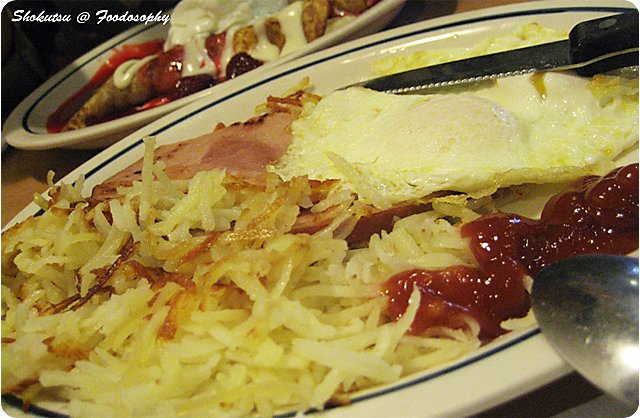 Lastly, the simple combination of eggs and hash, was the most comforting dish that I had some bites from. Perhaps its my advancing age, but for breakfast, I am into more savory items rather than anything sweet anymore. And will remind myself of this the next time I am having my morning meal outside. IHOP sure was a popular place though, as the room was packed with people, and with all the other breakfast/brunch places in town, this was pretty surprising. I suppose its capitalizing on its strong name value in America, and the de facto choice in some households for their breakfast fix. With the size of servings, heavy influx of sugar in many of their dishes, I think this is working to contribute to that obesity figure that is plaguing modern day society in this part of the world.