An impromptu rush out to catch the start of the World Cup match on the first Friday of the tournament led myself and a buddy to a nearby pub on the University of Alberta campus.  Funny, I used to remember this location as another drinking hole, ironically called The Library in years gone by.  It was once we stepped inside that I understood it was part of the Hudsons chain – the first outlet on Whyte Avenue another former stomping ground on yours truly in yesteryear.  I didn’t think much of it at the time, but see now that its grown to five location in Edmonton and also one in Calgary. 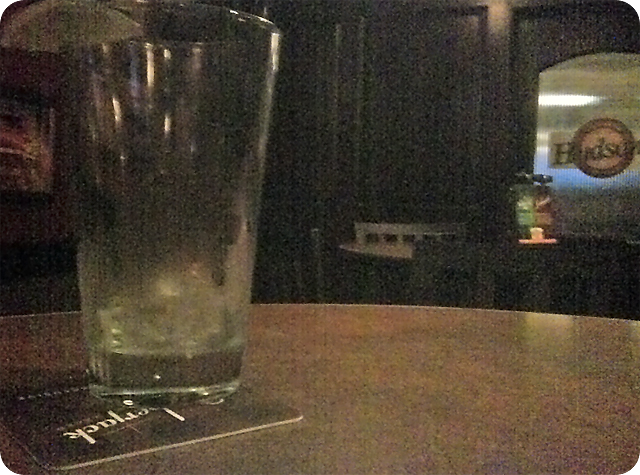 Sticking with the Canadian theme of this establishment, I opted for a standard domestic draught to wet the whistle as we settled in to watching the game.  We were stuck in the basement however which resulted in a very dark space.  My pal enjoyed the views of the attractive, perky, young waitress however, that seem to be the norm of places like this and she was working hard for a big tip.   END_OF_DOCUMENT_TOKEN_TO_BE_REPLACED

Two days to refresh my first-aid training at the St.John Ambulance centre, and two pubs within viewing distance, meant an opportunity to conduct a head-to-head pub-food battle.  After a long morning of tying splints, we headed across the street to Sneaky Pete’s Bar and Grill.

With only a few patrons at the bar, service was friendly and attentive.  Skipping the tempting option of a liquid lunch, I ordered the steak sandwich special for $9.95.  We were going to ask about the advertised “free lap dance with your beer”, but this was obviously an inside joke, we weren’t privy to.

END_OF_DOCUMENT_TOKEN_TO_BE_REPLACED

It seems to me that over the past several years, especially in food-related media, good old fashioned comfort food has achieved a heightened status as a style of cooking. Perhaps its the back-to-basics movement that has taken root in many aspects of our lives amid all the growing interjections of technology, busy work/life schedules, and the sense that the world is becoming too fast too soon for many of us. With the progression of time through generations though, there are always some things that remain constant, and for a lot of people when it comes to food, it is simple, home cooking that reminds us to enjoy our lives to the fullest and try to be happy in the process.  We all have our personal favorites.

This new found respect for comfort food stretches across cultures. I was re-watching a television documentary that followed the journey that Ryori no Tatsujin (Iron Chef) Masaharu Morimoto took before opening his New York outlet of his restaurant “Morimoto”. In the months ahead of their opening, for his prime investor Stephen Starr, Morimoto presented a sampling of some menu items he was planning to put on the menu. Surprising to me, this test run included a version of Nikujaga (literally translated as Meat-Potato) – a sweet broth flavored dish that combines thin slices of beef with rough cut potatoes and other vegetables, and is a common Japanese home cooked meal that differs from household to household (based on the recipe passed down through a family over generations). Whether this incorporation of home cooking into more formal restaurants translates into an actual trend in other high end/fine dining establishments, remains to be seen. It was interesting to hear Morimoto say that he feels this dish will go over well, given its sweet properties, and the history of dishes such as sukiyaki and teriyaki-flavored creations being popular in North America. Some interviews with day one customers confirmed this impression. 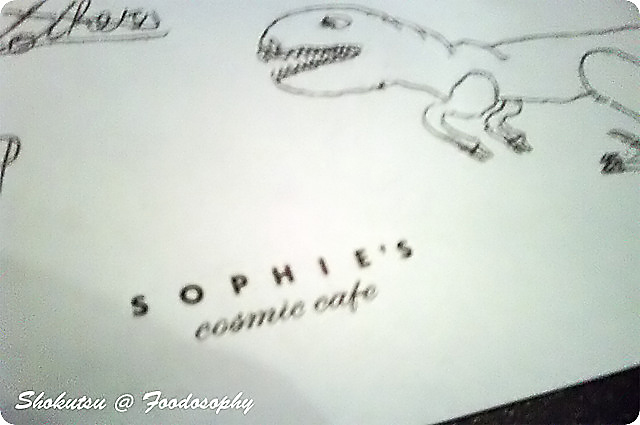 For comfort food in Vancouver, a popular spot in Kitsilano is Sophie’s Cosmic Cafe. Celebrating their 20th year of business in 2008, this business managed by the Dikeakos family is located on busy 4th avenue and is well known even for non-Vancouverites when visiting the west coast. On weekends, lineups out the door are commonplace – though I often wonder just who is in that que: devout neighourhood loyalists, curious tourists, or a mix of both? For those that know me, waiting in line is not something that I enjoy doing, so every opportunity that I’ve had to try this place out and its had a wait, I’ve kept walking/driving by. But this winter holiday season, I managed to pick a late afternoon weekday to swing by and get a seat inside without a great deal of waiting (no lineup outside but standing in the entranceway, it still did take a while to get noticed and given a table – more thoughts on the service later). With an interesting decor, I suppose I kept myself interested by scanning the walls of old school sports pendants, lunch box pails, etc. that were strung up on the walls. I don’t get the “cosmic” naming though, as there was nothing really “space-age” about the decorations.

As it was approaching four in the afternoon, I figured at this hour I wasn’t interested in their breakfast items. My dining companion did however give the Spanish Omelette a try. Filled with classic ingredients such as diced bell peppers, onions, tomatoes, the layers of egg were nice and light, and it came out hot. No complaints from the bites of it that I had, and the side potato hash was well seasoned and crispy, though overall it wasn’t that “OMG, this is amazing!” kind of food that you can get with some diners putting out home cooking. Should I come back, I will surely give the breakfast offerings a more thorough investigation, to see if there is anything that I could come back for, time and time again (which I suspect some customers must do). 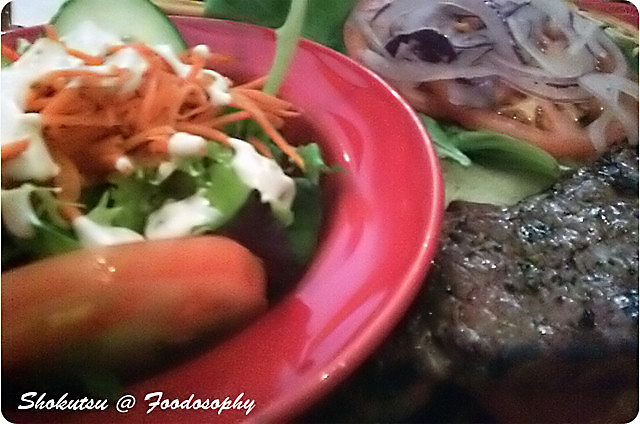 My own selection of the house Steak Sandwich was less than comforting. Under-seasoned, tough, and cooked all the way through (though I had asked it not to be done as such when I ordered), it was fairly thin as well, and thus overwhelmed by the three times thicker slices of bread it was served on (one side had been garnished with slices of lettuce, tomatoes and red onions). The side salad which I chose was quite poor – the green leafy vegetables felt like they’d been sitting on the kitchen counter all day as they were really dried out, and the dressing just squirts from some Kraft bottle.

In joints like this, I have this stereotype in my head of really robust, fast, engaging staff who are quick to seat you, take your order, make sure you are refilled with coffee without prompting, and a true sense of wanting to make sure you’ve had a satisfying meal. Our waitress was jovial and fast when asked for items (e.g. extra cream, etc.) although the food coming out of the kitchen was slower than I had hoped. Without a really full room, I wondered what happens when its one of those really busy brunch servings with people out the door. Or perhaps that explains the lineups? I’m also thinking that part of the “popularity” arises from really strong competition in the neighborhood for good solid comfort food. Other than Joe’s Grill up the street, I can’t recall any similar establishments, that could steal away customers. Are people buying the long standing tradition, the unique sounding name, thinking that if there is a lineup that it must be good eats? All of these I’ve tossed in my head, as frankly, I was left with a disappointing experience and was glad that I hadn’t lined up outside for this meal…