Street food is a basic way of life in Vietnam. Vendors, who typically specialize in only a few dishes, prepare the same limited menu day in and day out. A market visit in the morning. Long hours of preparation. Then they serve – their hours depend on the type of food, and the popularity of the vendor. 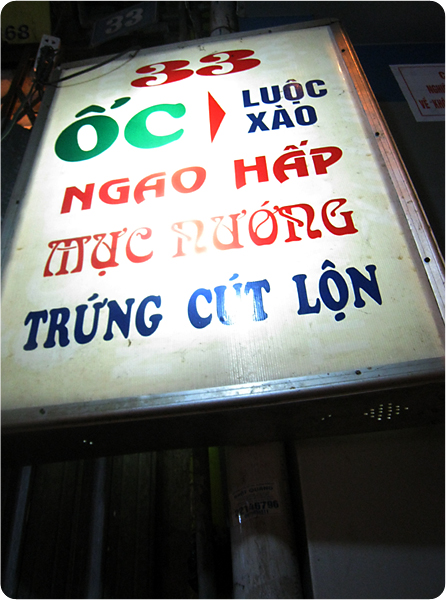 Seafood vendors usually open around 4pm, and serve till they are sold out, or 10pm, whichever comes first. Seating for street vendors is typically just a stool on the sidewalk. These aren’t high maintenance operations.

There are clearly a lot of advantages to this model. While diversity and selection is not one of them, it is more than made up for in their expertise in preparing these dishes, as well as their ability to utilize a minimum set of ingredients- helping to keep costs down.

Hanoi, while not on the coast, has like most Vietnamese cities a large seafood presence. From the seafood streets south of Hoan Kiem on To Hien Thanh, to various seafood vendors at markets scattered around the city, seafood is quite popular, and for good reason. It’s fresh. And cheap. 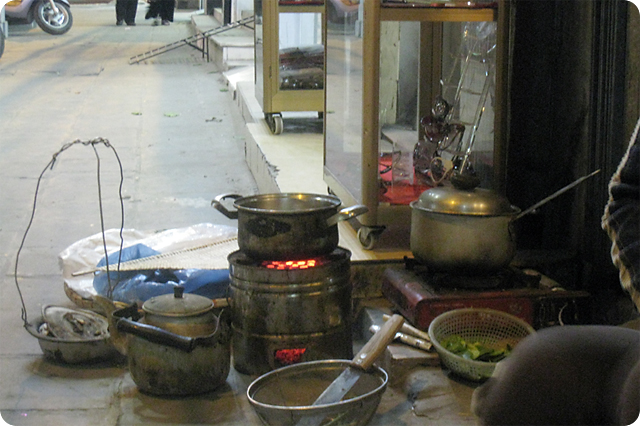 OC Vendor #33 doesnt fall in any of the high traffic seafood areas in Hanoi. Located near the heart of the tourist district, it’s a fairly non-descript operation on a sidewalk in front of their residence. They specialize in Oc – snails, but also carry steamed clams (ngao hap), grilled squid (muc nuong), and Trung Cut Lon – the Vietnamese version of Balut. They werent carrying squid nor Trung Cut Lon this day.

What drew my attention was the steady stream of business that they did. Always locals, two or three at a time. Her steps, and 2 stools were always occupied. When i pulled up, they quickly ran into the house to find me something suitable to sit on.

I order two bowls. A small bowl of Oc Luoc – better known as cockles, and a bowl of steamed clams. Immediately a stock pot goes onto the charcoal brazier, while she prepares the other ingredients.

The clams are prepared first, and are definitely cooked to order.  The basic flavouring of lemongrass, chili, and lime leaves are crushed together, then added to the stock. Once the broth is boiling, the clams are added – steaming quickly under the intense heat. After the clams have opened, they are removed from the broth, and the broth is allowed to reduce. The broth is poured over the bowl, and finally served with a dipping sauce of fish sauce, lime, vinegar, and some form of sweetener – likely sugar. 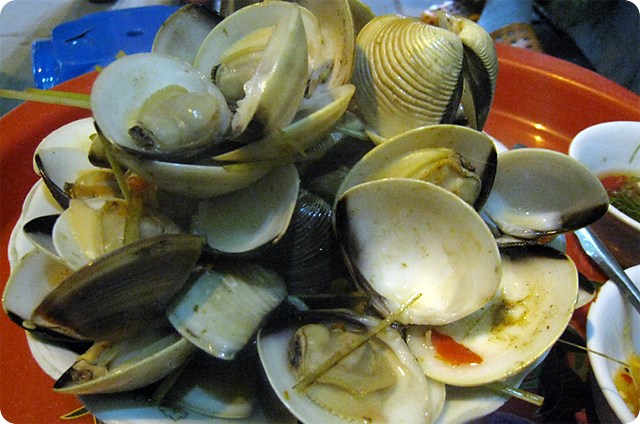 As for the taste? It’s as good and as simple as it sounds. The clams were fresh – any that failed to open were discarded by her before being served. The broth a perfect balance of the sea (from the clam juice) sour, sweet, and spice. Great balance, great taste, i wolfed these down in a heart beat, and proceeded to drink down the broth. A small baguette was excellent in soaking up any remaining sauce. A heart warming bowl indeed.

As I was eating the clams, she got to work on the Oc Luoc. These were boiled, with a slightly different preparation. The ubiquitous Vietnamese lemongrass, was accented with ginger, chili and lime. These come with the same dipping sauce, this time with additional condiments of lemongrass, chili, lime, and salt and pepper.

The cockles were good, but a bit sandy. The flavour is wonderful – the ginger adds quite a different dimension to it. But it didnt have the same heartwarming feeling the clams did. Some cockles were definitely on the mushy side, and not the freshest i’ve had. Good in a pinch, but the clams were better.

At the end of the day, it wasn’t the best seafood i had in Vietnam, but if you find yourself walking around the Old Quarter, and want a quick snack of seafood, this is a good alternative to the tourist restaurants that abound. It’s cheap, and it’s as tasty as anything else served in the Old Quarter. I think for cockles and snails though, i’d go to To Hien Thanh – much larger volumes mean higher turnover, and thus fresher Oc. The clams, however, were excellent, and well worth a visit.

Foodosopher note: I apologize for the lack of correct accents. I do not have a Vietnamese keyboard. And really, i wouldn’t know exactly which accents to use either!