Homey, perhaps a touch dated, honest, and old school is pretty much how I would characterize this unpretentious, Japanese-run little restaurant situated in a tiny commercial building on the corner of Rumble Street and Royal Oak Avenue in south Burnaby.  Despite its laid back nature and location, on my first random decision to eat here a few months back, I was met by a packed room upon reaching the door on a rainy weekday evening and I soon turned around back to my car wondering what the secret was and vowing to come back another day.  And so that’s exactly what I did on a recent weekend outing to this part of town, and fortunately this time I was able to get a seat. 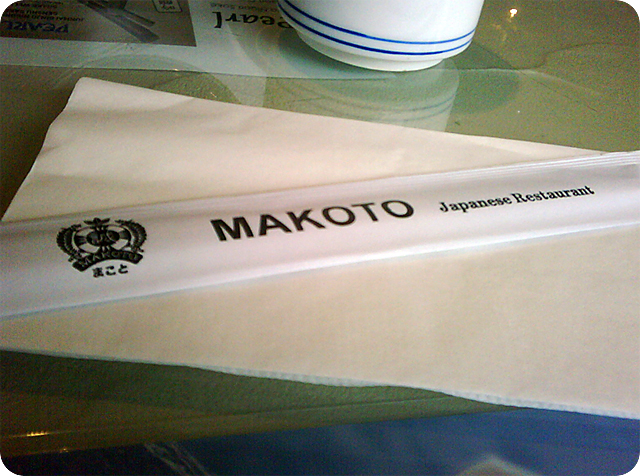 Makoto Japanese Restaurant probably has about eight to ten tables for four, as well as a handful of stools at the sushi bar – making it clearly smaller in scale than say the relatively nearby other decent sushi restaurant (Nao Sushi) in this neck of the woods.  I’m not sure how long its been around, but if the chairs are any indication, it could be its been in operation for a very long time.  It had the atmosphere of a classic youshoku-ya in Japan, straddling that decor line between East and West.  On a weekend afternoon, only one server was visible, as well as a man stationed at the sushi counter and I could spot another person through the pass window to the kitchen.  I have a guess its a family run operation by this slim roster of staff.