Korean royal court cuisine (in Korean, gungjung yori) is an elaborate affair that involves the presentation of numerous dishes in an extensive meal that originated in one of the golden eras of the peninsula’s lengthy history and is steeped in Confucian traditions.  The dining style that was for the ruling class of the Jeseon Dynasty has been adapted in the modern era and can be found served in many restaurants in Korea today for those wishing to adventure into a culinary time machine.  Fortunately on this recent visit to the Asian nation, I was presented with the choice of indulging in this branch of the country’s cuisine.   Actually, I was given a choice between two locations: one described as being more upscale in a fancier setting but with weaker food, and the other in more homey conditions but with better food.  I chose the latter and thus we ended up at the Sinbong branch of Sodamgol. 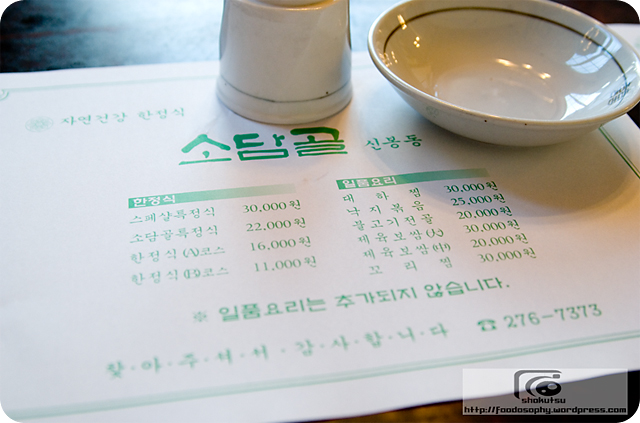 With various set meals (priced per person), our group of six opted to all get the same, making it much easier for the restaurant to handle.  At the different price points, the items would differ.  What follows below is a summary of what was included in the 16,000 won/person listing (so about C$14 each).  Also note, the portion sizes are representative of what was served to each table of three, aside from the rice and chigae that we each received our own bowls of.