There are some cuisines that for some reason or another just seem more conducive and better appreciated in a group environment.  For me, Indian is one of those.  Perhaps is the still relative niche-ness and lack of true understanding of the diversity of this country’s food culture by many North Americans that leads one to want to share with others – perhaps out of fear of making a disappointing decision while ordering the unknown. Others might suggest that its just simply wanting to try a little of everything on the usually large menus of such restaurants – which in and of itself is not a bad thing for someone that is continually trying to broaden their perspectives and knowledge. 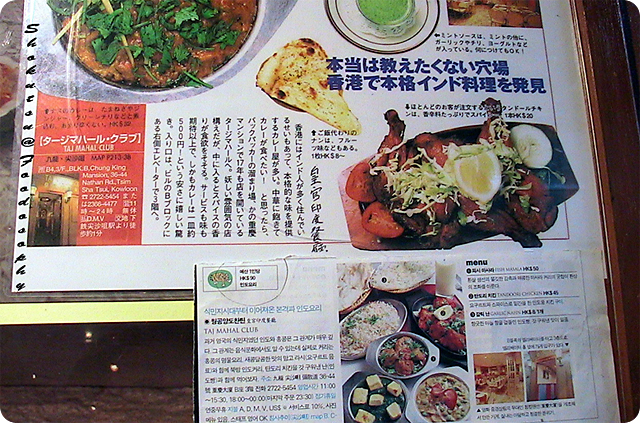 While in Hong Kong recently, it dawned on me that there might be a hypothesis worth testing.  Does the lack of great familiarity with Indian cuisine also work hand-in-hand when dining in a group where most people don’t know each other well?  A double dose of hesitation, uncertainty and tentativeness so to speak.   I decided to have an actual experiment and our group’s decision to share a meal together in a strange country (no native Hong Kongers in our posse), with non-native cuisine and in a location (the restaurant was inside an actual residential complex) that was slightly intimidating, even further complicated matters.

Located on the third floor, and with a group of ten members, we opted to take the stairs up to the Taj Mahal Club restaurant, despite the existence of an elevator.  In hindsight, I am not sure that was the wisest decision, as the halls were darkly lit and dingy, with all sorts of local residents (all apparently Indians) sitting in the stairwell passing time with friends, and it felt like we were invading someone’s private space.  I swear I also saw smears of red on the walls which did not look like paint at all, and made me think this place has a sketchy past.  But once you get to the front door, you are welcomed by a brightly lit display, complete with press coverage dutifully collected and shown on the wall – including both local and foreign media. 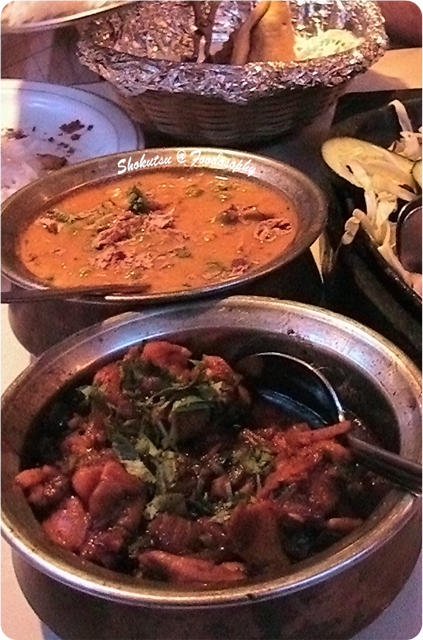 Despite the relatively uneasy start to our night, the meal itself was an excellent example of the ability to get authentic ethnic cuisine in a country not native to that type of food.  The various curries we ordered included some staple chicken and lamb for those more timid, as well as more pure vegetarian options (yes, those people still do exist!).   The lamb version that I sampled had an ample amount of spice and was flavorful and the hot kick from it certainly made the bowl of rice and plates of fresh naan go all the more faster.  The coconut milk-based curries on our table were a bit sweeter and thus satisfied those for whom high levels of spice was not appreciated.  Simply put, our folks with various preferences meshed well with the curry menu and it enabled everyone to get at least one that they enjoyed, thus not leaving anyone out.

Tandoori chicken is always a catch-22 for me.  As much as I enjoy it, too many times I’ve been let down by it being overcooked and a dry, flaky mess of meat.  Thankfully, Taj Mahal Club does an amazing job with this.  The meat was tender and juicy, and the marinade had held up incredibly well through the cooking process.   An assortment of other dishes were on our table, but given the size of our row, I was unable to get other images.  But judging from the loud conversations and general jovial mood and rapidly depleting plates and bowls, I could tell that things were just as tasty at other sections of our row.

So how would I conclude my tested idea?  I would say that whenever great food can be had, it certainly helps to relax the mood on a night out with people who are meeting for the very first time.  The diversity of Indian cuisine, even in just the well known curry dishes alone, work well to meet the personal tastes and needs of everyone at the table, from carnivores to vegetarians, lovers of spice and those who are not.  When people are not really comfortable with a type of cuisine, I think that even works to help break the ice and enable those who are slightly more familiar to share what they know, and engage others in conversation.  A sort of exploration as a team occurs, with everyone anxious to give their thoughts and opinions on each dish, knowing that its a safe environment with nobody really standing out as a true expert on the cuisine so their impressions won’t be smashed to smithereens.

Vancouver is blessed with a myriad of choices when it comes to Korean cuisine. Already, I’ve personally visited a selection of them, with related reports posted here on Foodosophy. By no means is this a complete listing, as many other known establishments such as Book Kyung Ban Jeom, Norboo, Seoul Royal House, etc. have yet to be visited and reviewed. In time, I will no doubt get to them.

Some background (and please, take it with a grain of salt – I am no demographer or population sociologist, so spare me any diatribe or anal nitpicking of the data)… the ethnic Korean population as noted in the 2006 census for the Census Metropolitan Area (CMA) of Vancouver was published as being between 1% ~ 2%. This is the case for other ethnic groups as well, such as ‘Southeast Asian’, ‘West Asian’, ‘Latin American’, and others (with the largest communities being identified as ‘Chinese’ at 18.2%, followed by ‘South Asian’ at 9.9% and ‘Filipinos’ at 3.8%). Thus as you can see, they are not a large piece of the ethnic pie, so to speak.

On my recent visit to the neighboring city of Coquitlam when I dined at the satisfying Blue Sea, I spotted Insadong at the intersection of North Road and Lougheed Highway, as I was making the return drive home. If you’ve ever been to Coquitlam, perhaps you’ll feel as I did and think that a large part of this reported Korean population in the Vancouver CMA is all based here, given the prevalence of so many Korean businesses and signs in Hangul. Frankly, it could easily rival the likes of the Wilshire/Hancock Park neighborhoods of Los Angeles, and the Shin-Okubo area in Tokyo, for having a densely concentrated Korean community that manages to exist in its own little bubble all within another country’s society. A bit surprising, considering the small percentage of the population that are Korean.

Incidentally, Insadong is actually a neighborhood in Seoul that is best known for its drive to preserve Korean culture, with shops selling old antique wares and classic buildings such as tea houses that serve it in the old ways.  I’d visited one of these many years ago on one of my earliest visits to South Korea and found it to be an enlightening experience.  I think the operators of ‘Insadong, the restaurant’ have tried to incorporate some of these elements, with some Korean-themed artwork displayed in the glass cases in the front of the house.

Stepping inside the entrance that is situated on the side of the building that does not face Lougheed Highway, you are immediately drawn into a deceptively large space (if you were to envision the size from just from the exterior of the building)  From this waiting area, you can see the various tanks of live seafood (fish, crab, and lobster).  Upon being seated, I could still see the tanks from my table.  There are also several private rooms in the back of the restaurant which you pass by on the way to the restroom.  I think these are used most often for parties, celebrations, etc. and not something that you can use unreserved.

Completely famished, I went off the board and picked a non-traditional item as an appetizer in the sweet and spicy glazed, deep fried chicken wings.  They were larger than the standard size ones you get at say a local Canadian pub during happy hour, and thus a good amount of meat was on the bones, all encased in a nice crispy crust.  As expected, these wings got my taste buds yearning for a nice cold Korean beer.

A short while ago on a repeat visit to DBBG with some other friends, including one who had lived for a few years in several parts of Korea as a student, he had ordered this dish which intrigued me.  Not normally a big fan of bulgogi, as I prefer my meat to be seasoned more savory than sweet, I had not seen it done like this in a Korean restaurant before, soup-based and almost like a Japanese sukiyaki.  The broth was neither too light nor too heavy, and the slices of beef combined with the onions melded well in the sweeter flavored soup.  I would not say this dish blew me away, but would see it as a heartwarming meal as the days get colder in Vancouver’s autumn.

I’m beginning to sense that since the beginning of Foodosophy, that I’ve written about soondubu frequently.  The reason being, it is perhaps my most favorite spicy Korean jjigae (stew) dish.  In Insadong, I think I have discovered the most flavorful and authentic tasting version in the GVA.  The rich seafood flavor that is infused into the spicy gochujang-based soup was the best I’ve had outside of Korea.  The soft tofu was plentiful and combined with the green onions and mushrooms, made for a complex texture medley bite after bite.  I always prefer to eat this with a side of steamed white rice, scooping a spoonful of it into the broth.

I’d heard rumors that Insadong is quite popular and respected in the Korean community, with immigrants/new Canadians and short stay students alike, as well as with local media publications (e.g. ‘best Korean’ in the 2008 Golden Plates Readers Choice Awards by the Georgia Straight).   Word-of-mouth has been my introduction to this place, and I must thank those who recommended it to me, despite the needed drive out to Coquitlam.  I am sure there are other Korean gems in the neighborhood, as it has now been two-for-three in terms of satistifying dining experiences (the lone disappointment so far being the House of Tofu Soup).  If any readers have other suggestions in the area, please feel free to leave a note in the comments section.