A collection of random snapshots taken mostly with an iPhone 3GS.  A mishmash of mainly casual Korean fare and some western dishes eaten in three main provinces on this recent visit to Asia. 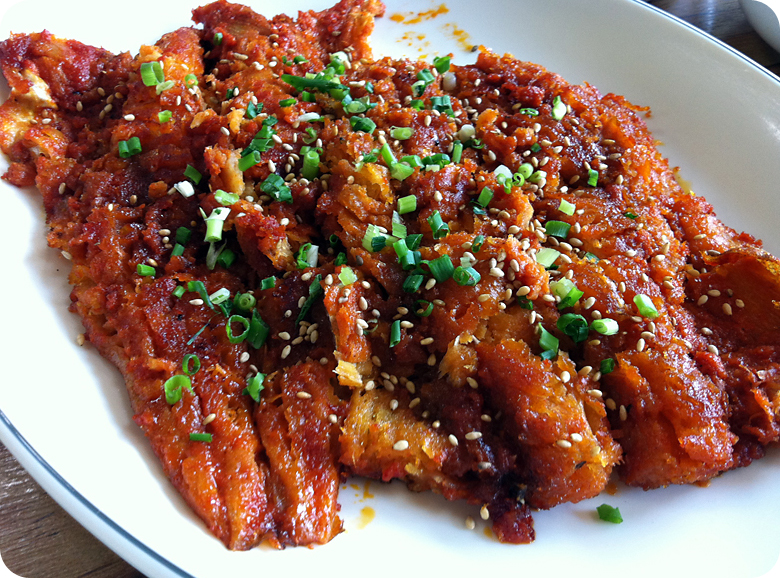 END_OF_DOCUMENT_TOKEN_TO_BE_REPLACED

With long business hours (Mon~Fri, 7am to midnight; Sat, 7am to 11pm; Sun, 9am to 10pm) and a serious dedication to contemporary art and design – given their ties to a nearby gallery – the To Go Coffee Shop housed within this quaint brick-and-glass building made for the best of both worlds. Open early enough for a warm cup of coffee to get your day going, but also laid back and aesthetically interesting with its display of modern artwork to make you want to stay longer than you normally might just to take in the scene.

The bukchon neighborhood follows a similar dual dynamic.  Retro remnants of a by-gone era with traditional architecture and residences that take you back in time, flanked by rows of ultra hip and trendy shops popular with the city’s busy youth.  The latter characteristic reminded me of the ura-Harajuku area of Tokyo. I have a friend who works as an assistant director at one of the many galleries here, and I’d always heard interesting things from her about hanging out and working in this district, so I had to check it out for myself, camera in hand.

END_OF_DOCUMENT_TOKEN_TO_BE_REPLACED

Life imitating art. That’s what I thought the moment the performance show began at The Flair Bar.

At the end of a long night that included a fantastic barbecue dinner hosted by my local business associates at their favorite neighborhood restaurant, followed by a few pints at a local pub, my colleague and I were being walked back to our hotel by our gracious Korean hosts when I could see a look in their eyes as if to say, “do you really want to call it a night?”. I glanced over to my still awake colleague and gave him a “why not?” expression and our friends then proceeded to lead us down another busy street lined with shops still open and welcoming revelers still looking for another place to fuel up on more liquor and socialize.

Now I am sure many of you are familiar with Hollywood actor Tom Cruise, and perhaps one of his movies in which he portrayed a cocky bartender who learned to toss bottles of booze with the dexterity of a circus performer. Clearly, this place had patterned their place after the movie set and had the concept down pat as after we had sat down at a table and ordered a round of drinks, suddenly things came to life. The lights lowered, and a blast of music came on followed by a boisterous voice on the speakers. Looking closer, I noticed it was a young woman on the microphone who was standing towards one side of the long counter bar that anchored the room.

Although I had not a clue as to what she was saying, it was clear that the patrons sure did, and had probably been sitting waiting for the show to begin. It seemed like she began things by introducing her team of flair artists, who came from the back kitchen area one by one and did a short routine of throwing bottles up in the air. They then broke into a larger team routine in which team members juggled together. The MC then shouted out questions and some members of the crowd began saying things back, which turned out to be orders. The flair bartenders engaged in more difficult tricks all the while composing the drinks that were being ordered. Despite not knowing the language, the visuals themselves served to help me understand what was going on and to be that up front and personal to the show, was quite entertaining.

The show then evolved into a sort of auction. Special drink orders, even food items were being put up for bids from the engaged customers. My colleague even got into the action, not even knowing what was up for bid. I think people can easily get caught up in the lively atmosphere that is created – much of the credit goes to the MC, who was commanding the show and getting a lot of audience participation. In the end, my friend lost out on a bid for what turned out to be some special cocktail, but seeing our disappointment, and probably since we stood out as foreigners, we were presented with a 12 inch pizza as a consolation prize. 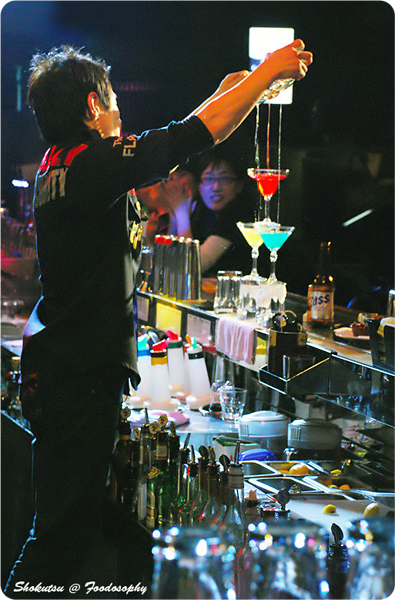 The flair bartenders were a talented crew. The array of tricks they performed was impressive, and coupled with the energetic mistress of ceremonies, this last stop on our evening turned out to be quite the high. I am quite glad that we stopped in, and appreciate the incredible luck we had in finding such an innovative establishment, that we probably never expected to find in Seoul. In places like this that have a “gimmick”, that alone is not enough though. The level of engagement that the crowd has with the performers, is a critical element in creating the atmosphere that we found so enjoyable. If you ever find your way to the Kangnam district in Seoul, I’d suggest you give this show a chance.