As the boom in interest for the izakaya genre exploded in recent years on the Canadian west coast, there were a few that stood out for me in terms of offering something that I strongly felt would appeal to the local market and tastes.  Zakkushi was on the top of this list, especially when you consider their base premise is something that North Americans can relate to – that being charcoal barbecue and grilled meat-on-a-stick.  For the newbie, it is a lot more understandable and palatable than say someone just getting introduced to say sushi for the very first time as their initial foray into Japanese cuisine.

So it was quite fitting that I visited the Main Street (one of three outlets of this business that is fast becoming a growing chain) with a friend of mine who self-admittedly noted that he didn’t grow up with a lot of “ethnic” food in his parents’ home in rural Saskatchewan, and even today, his folks aren’t that adventurous but he’s learning to branch out his eating repertoire now that he’s based in Vancouver.  I thought I’d try and shock his system by introducing to him something that I was positive he would find odd and wonder why anyone would want to eat it.

That is, the chicken nankotsu (cartilage).  Lightly breaded and deep fried with a delicate touch.  Splashing a wedge of lemon completed the presentation.  The requisite soft crunch of the cartilage can be an acquired taste, especially when many of the other complimentary skewers have actual meat on them.  They’ve always done it well here (I’ve had it more often at their 4th Ave location in years past, but understand its not available there anymore).  My friend, well, he even liked it! 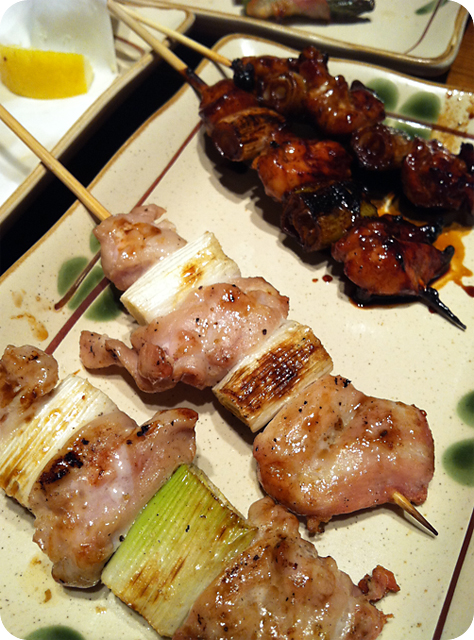 Though not all were photographed, as the food disappeared quickly as they were brought to our group’s table, we shared an assortment of stalwarts among the chicken and pork options – Tsukune, Negima, Sunagimo, Heart, Negi P-Toro, and heck even the Cheese Mochi Maki!  A mix of shio and tare seasonings were chosen, partly in order to teach my newbie friend on the finer points of yakitori.  I usually prefer the former, as I find there is nothing better than a light sprinkle of salt to bring out the flavors imparted by the charcoal heat on the meat proteins.  I could even an endless amount of food here at Zakkushi.  Easily my favorite izakaya in Vancouver.  Quality is always spot on, the grilling level is superb and the food comes out timely enough.  It has the authentic vibe that I absolutely crave when it comes to this genre, and they have brought the clean, commercialized version of yakitori-ya you see in Japan, here to Vancouver.  This is one place in the city everyone should check out – locals and tourists alike – its that high in my books!

9 thoughts on “Zakkushi – Vancouver, BC”