Much like an undercover agent infiltrating a tightly closed society, there are times when I deliberately jump right into the most touristy spots I can think of to try and get a sense of what drives non-locals to visit such eating establishments.  More often than not, these kind of places are always touted and raved about by the native city’s mainstream media and publications, that surprisingly have far reaching audiences.  Chalk it up to the incredibly connected and digital world we live in.  In the past twelve years,  I’ve had the pleasure of setting up a home base in four major cities now and in each one, I’ve conducted a similar exercise just for fun.  Here in Vancouver, The Sandbar rated high on my list of tourist traps. 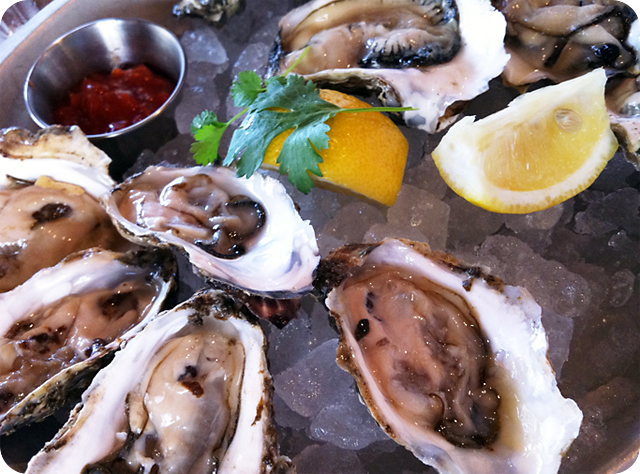 However this time, I had some out of town visitors in tow with me as I guided them around the markets at Granville Island and rather than bother with making a long stroll back to the vehicle we came in, I popped inside up and up the stairs to see if we could get a table on short notice.  Being that it was a beautiful summer day, I had my doubts we could get one on the outdoor patio and that ended up being the case.  Instead we were seated just inside, but the view of the water below was pretty much obscured.  For visitors, provided you get a good stroll around the Island ahead of dinner, I think you can pretty much picture the view you could have if seated on the rail on the patio. 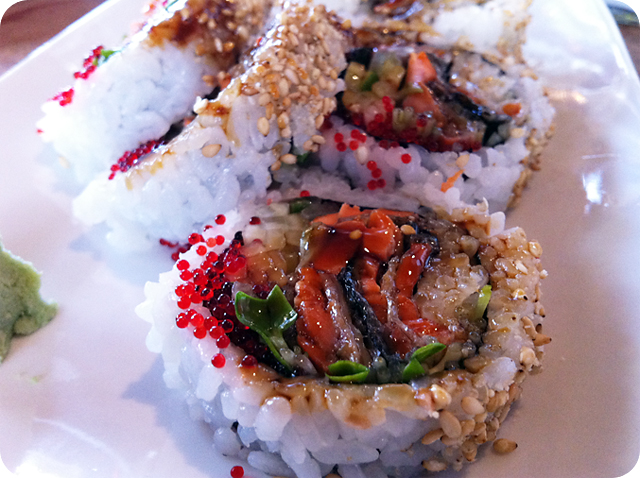 As a frequent visitor to Lobsterman to get my own supply of fresh oysters for home shucking and slurping, its not often that I choose to pay a few extra bucks for them in a restaurant, but we needed something fresh, light and sharable to kick start our dinner together.  Nicely chilled and free of debris which suggested a skilled shucker, the Royal Miyagi (one of the two types we chose) were delicious.  A nice squeeze of fresh lemon was all I needed to boost the flavor.  Cocktail sauce, I’m not a huge fan of personally.

Coupled as an appetizer was this B.C. Roll (comprised of BBQ salmon skin, cucumber, and tobiko).  As strange as it sounds, I do like that crispy texture and smoky, oily flavor that exudes out of the skin from this fish, and combined with softer elements in a maki, this is one roll I will actually order from time to time.   A good tight, evenly rounded roll, with a balanced spread of ingredients inside, and not messily plated. I have heard good things about the sushi bar on the main floor and while this was the only thing made from that part of the restaurant, it was good enough to want me to try it again for more. 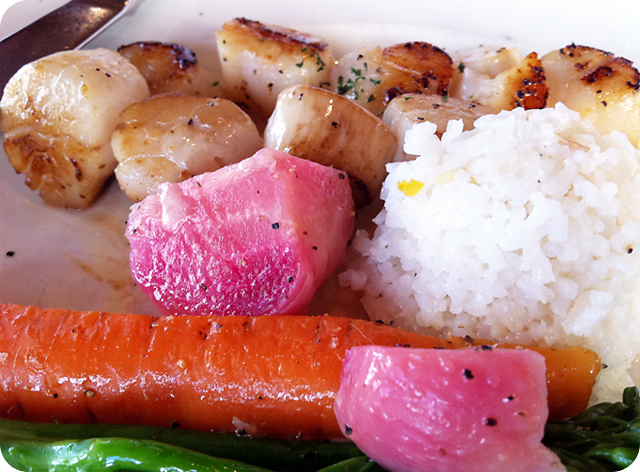 Around came the mains and I captured some of the dishes within arm’s view of my camera. These Pan Seared Scallops for example, flavored with a bright citrus butter, root vegetables and a Jasmine rice provided the starch.  As I was unable to sample a bit from this, I’ll reserve comments simply to say the scallops looked a tad on the smaller size. 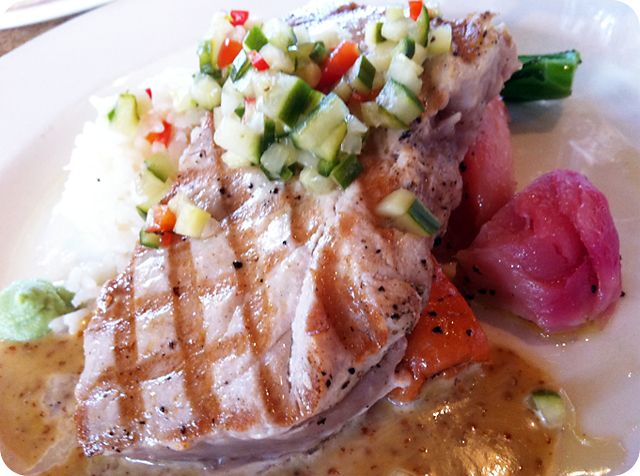 More towards my corner of the table was a pair of grilled fish dishes as mains.  Mahi Mahi as well as Ahi Tuna.  Pretty much the same salsa and accompanying veg on both plates as you can see.  Lighter colored grill marks crisscrossed each fillet,  and having tasted both, I had to give the win to the Ahi Tuna.  Both were cooked very well, with a little bit of pink in the middle and seemingly were rested a bit before our server had brought them out.  Seasoning was a touch light for me, that would be my only complaint on this.  But that’s what extra table salt is for. 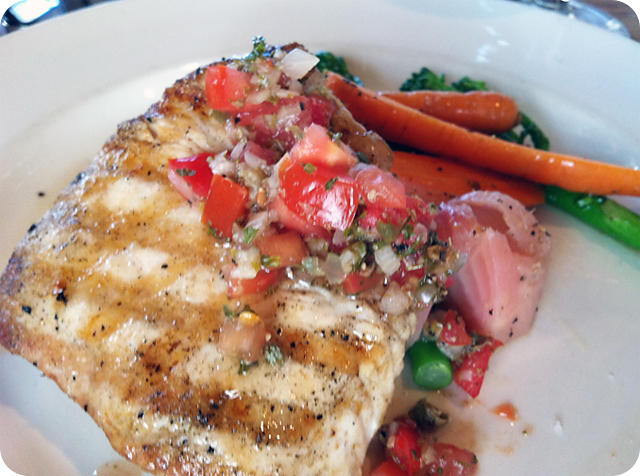 Lastly some desserts were shared.  Closest to me was this Crème Brûlée with a stick of biscotti and a half strawberry garnish.  Not a particularly deep dish, but perhaps just right for two to share after a hearty meal.  As many dessert fans will probably note, the top hard crust of torched sugar is what makes this dish, and ours was a bit on the thin side with no obvious burnt marks.  Love seeing those little bits of real vanilla bean too in desserts. 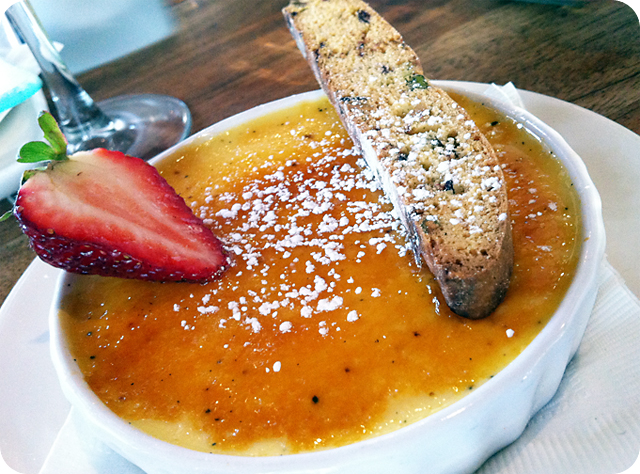 And so with that, my visit to one of the city’s better advertised restaurants in one of the most busiest tourist hubs in town came to an end.  Overall, I had a satisfying meal that turned out to be be better tasting that I perhaps expected.  Relative to price though, I feel its a touch on the high side and its clear they capitalize on their prime location and strong walk up traffic.  Can’t fault them for that however.  Business is business.  And at The Sandbar, business seems to be going quite well.

One thought on “Sandbar – Vancouver, BC”