Simple is best.  An adage that applies to many things in this thing called life, including something we all love, food.  Lately, I’ve been all about uncomplicated flavors and limited combinations of ingredients that tell a story on my taste buds.  Smart cookery and unpretentious offerings are my current targets when it comes to dining out.  Give me something that’s comforting too and well you’ve got something right in my wheelhouse.  An old stalwart, Japanese ramen, is right up there in my favorite foods of all time. 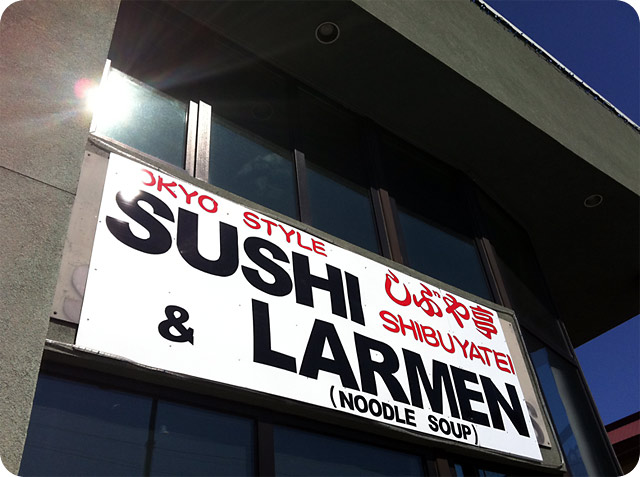 I’d been notified in July that a new operation was about to set up shop at a busy intersection in Richmond, formerly occupied by a sandwich business.  The end of July marked their opening and as a few weeks had passed (and having received some insights from members granted a pre-opening audience) I finally made my way out for a lunchtime meal.  Inside, remnants of the previous tenant were apparent from the still fresh business handover, with some temporary signage hung outside for the Tokyo-style of ramen being produced by Shibuyatei.

A bare-bones, one-man operation that is just getting its feet wet (Japanese language job boards note they are looking for some extra help) but from what I saw, already had customers coming in and enjoying what they were having.  Perhaps slightly different from the predominantly Asian clientele you usually see at places offering ramen (especially in a place like Richmond), the groups and solo diners (and take away customers) were all non-Asian on this particular day.  I kind of guess that the business people in this area and perhaps the customers who frequented the former sandwich business were much the same.

Aside from the ramen, there are sushi combinations and other cooked dishes on the menu here (including some meat stuffed in bun variety, reminding me of Japanese convenience store quick eats).  With the counter separating the scattered tables from the open kitchen, ordering is done fairly informally.  Feel free to get the gentleman’s attention and give your order.  I’m sure once some wait staff are hired, things will operate a bit differently but the laxness of it all (almost feels like you’re entering his home kitchen) has its own appeal.

The pork gyoza that began my meal had an interesting twist to them in terms of flavor, as I got the distinct taste of takenoko (bamboo shoots).  I don’t think I’ve ever had gyoza in Vancouver with that unique taste incorporated inside so it was a pleasant earthy surprise.  The meat dumplings themselves were juicy and the meat mixture hadn’t been kneaded too much making it overly tough/firm, and the skins from the pan fry/steam cooking process had retained their chewy texture.  Definitely hand made, no mass factory production here. A bottle of chili sesame oil brought out with the vinegar/soy sauce dip, a nice touch that is often overlooked.

Now for those long time followers of foodosophy, you’ll know that shoyu-base ramen is not something I order often.  But when options are limited, its often the best barometer for checking out a ramen-ya‘s basics.  I think its because I often associate it with the very simple, perhaps overly so, ramen that you get in a school cafeteria or neighborhood ramen-ya in Japan.  The version here at Shibuyatei  was an upgrade from the minimalistic bowls I’ve had in the past.  Not overly fancy though or innovative with toppings, but a nice array of standard ingredients such as the bean sprouts, corn, green scallions, chashu and a slice of nori.

As explicitly noted on the menu board, there is no MSG being used, and that was clear from a few spoonfuls of the broth.  Delicate yet not overly salty, artificial tasting nor overpowering but still having the subtle flavors of the soy that one would expect.  The kind of soup you could easily finish drinking, and not have to worry about the ramifications of consuming a load of fatty oil as say you’d get in a tonkotsu broth.  For that, it was a refreshing change for me.

I sure hope this place is able to develop a loyal fan base, as I’m always a fan of these hole-in-the-wall places run by a single proprietor looking to establish themselves in a fierce restaurant market.

2 thoughts on “Shibuyatei – Richmond, BC”