Edmonton’s Chinatown district while a long standing one, is not as large as the editions that thrive in other major Western Canada centres such as Calgary or Vancouver in my mind.  At least it doesn’t seem that way in terms of the variety and choice when it comes to dining in the zones often flanked by the distinctive gates that signify you are “officially” inside Chinatown.  My sense of the heart of the Alberta capital’s version is 97th street, stretching from the south end at Jasper Avenue and up to perhaps 108th~110th avenue to the north.  The relatively smaller size thus gives a more cozy and neighborly atmosphere to the place, almost like if you live and work here, you would know everyone on each street corner.  When I see some of the elderly ethnic Chinese seniors strolling the streets or sitting inside some of the businesses (no doubt run by their younger relatives), I must say some have probably lived their whole long life in this east Asian cultural bubble in Edmonton. 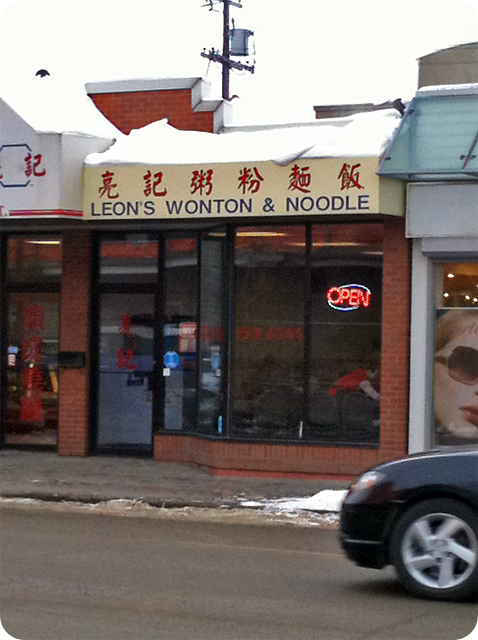 Leon’s Wonton & Noodle House is one such place that brings to mind this tradition.  The proprietors (a couple, she in the front of house, he cooking in the back) have been in this city for over twenty-five years, after emigrating from Vietnam.  Some supporting articles that can be viewed inside the restaurant under the glass covered table top’s which mentioned their history and business operations.  A loyal following seems to exist as far as their customer base is concerned if you were to read and believe the narratives and quotes.  My kind of place.  Homey, simple, comfortable, lots of choice if you come here often and so you don’t get sick of the menu, and modestly priced.

If you’re able to snag a table near the front, the large windows give a nice moving panel of interest for those who enjoy people watching.  On this day though, given the extreme December cold, there were only a handful that I saw.  Strangely, most of them seemed to stop next door for some takeway, from an establishment selling Chinese barbecue pork and duck.

The menu sheet is insanely large and spread out on the table under the glass.  Must have been over a hundred choices.  Chow mein, fried rice, soups, the traditional trio of beef/chicken/pork-type meals were present, but the congee section caught my eye.  Though I’m not really a lover of this rather soft and bland dish (that I associate more with something a sick person would want to eat), the brisk weather had me craving something different I suppose.  The Seafood Congee shown below was made up mostly of smaller pieces of squid and shrimp.  Texturally as I expected, but not as gluey as I hadfeared.  Had a slight salt element but not overly so.  All in all, not a bad bowl of this stuff, but then again, I’m not a connoisseur by any means. 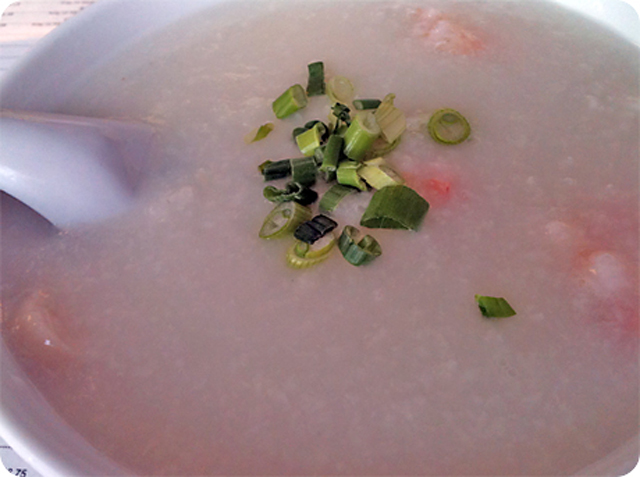 Our server suggested we have the green onion cake to compliment the congee.  I was a bit fearful it would be that heavy, dense and oily pancake-type.  Alas, it wasn’t!  In fact, it was much like the one I had at Mini Mango just days earlier.  Light and soft on the inside, with a golden crispy exterior.  Wasn’t sure if I got lucky, or if this is truly the Vietnamese version of this.  Perhaps someone can enlighten me.  Or is that memory of bad green onion cake a case of a black swan? 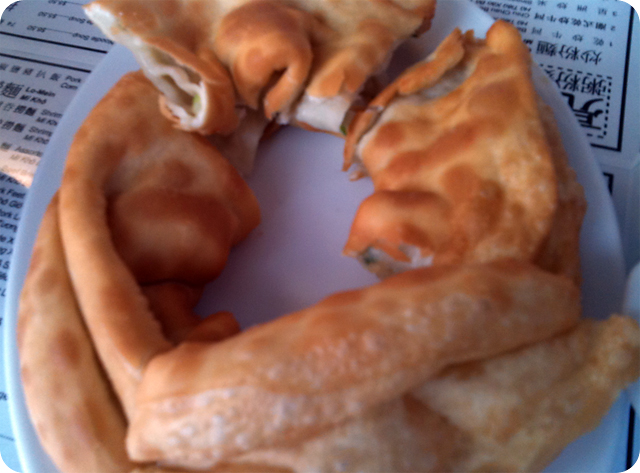 Secondarily, meat-on-rice was the other sampled dish.  Beef brisket and bok choy to be exact, stir fried together in a Chinese 5 Spice scented, thickened oyster sauce mixture. Hearty, hot and filling.  All the key elements to look for in a dish when its done so easily and slopped on top of a generous serving of steamed white rice.  The meat was quite tender and not many grisly or fatty bits were noted, and this was indeed appreciated. 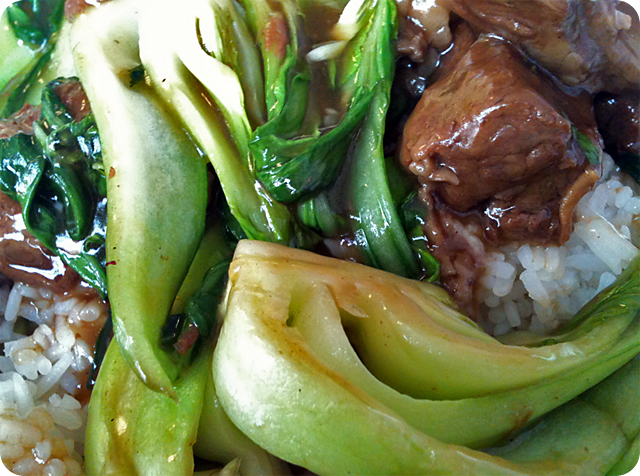 So there you have it.  Easy, basic and stomach stretching food served in a bare bones environment by some long standing residents of Edmonton’s Chinatown.  A bit of a nostalgic kick for some, and a welcome reprieve from the all too ubiquitous Western chains that I see sprouting up all over the city, feeding the city’s residents.  For the prices at some of those places serving very mediocre food, I’ll take this old school cuisine any day of the week for a quarter of the price to boot!