In Korea and not in the mood for barbecue?  Possible?  Yes, well at least on this mid-morning in the outskirts of Seoul where I began my day.  With the humid weather already beginning to test my personal tolerance levels and with the lunch hour quickly approaching, a random stopover led us to this slightly gaudy, castle-looking building that housed a restaurant known as Kwangrung Hanubang.  The nearby area is populated by many residential apartment complexes and appears to be building up into a major suburban district that is well connected by major roads into the capital city.  No doubt, this restaurant (one of many along this busy street) is a popular place for locals to dine.

Proudly featuring domestic Korean beef sourced only from the prized Kwangreung region of the same Gyeonggi province, the signage outside on the pop-up stands and also inside on the various frames that were displayed and given by local and regional associations and food industry organizations,  it was clear that the beef was something to definitely take in.  Despite the temptations, and believe me they were strong, we were looking for a light lunch amid the air conditioned environment and did not order any, much to my amazement in hindsight.  Nearby, other groups were happily grilling and the aromas were intoxicating but we managed to hold off, knowing our day was still long and opportunities to eat still lied ahead. 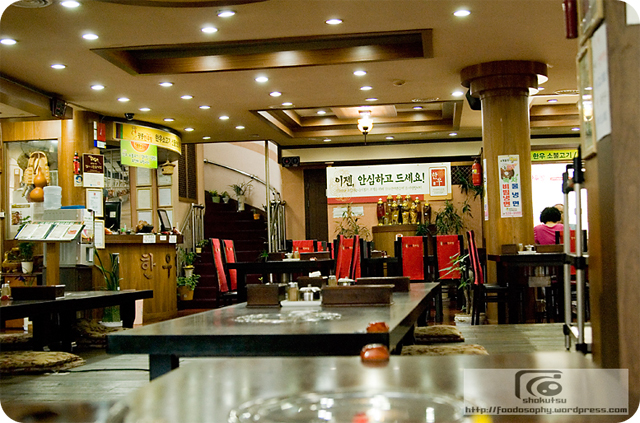 The interior was quite spacious, this image only shows one section of the restaurant’s dining area, all on flooring with low tables.  The far end here did have table & chair seating arrangements as well.  Tables were clean and efficiently space.  I could see this place really boisterous and rocking in the evening hours when the liquor is flowing liberally. 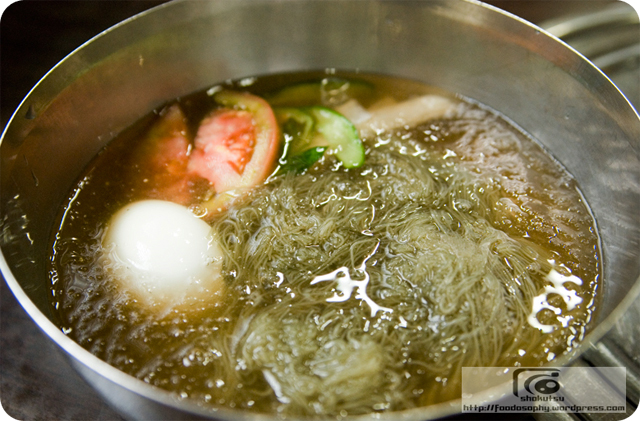 Now normally, a chilling bowl of refreshing mul naengmyeon is ordered/served AFTER a hearty and greasy feast of barbecue.  Partly as a way to reset the palate, and to provide one last filling injection into one’s stomach, especially if the battle to get some tasty slices of beef, pork, chicken during the main meal turned into a battle zone and your chopsticks weren’t fast enough and thus you ended up still hungry.  But I do enjoy this dish on its own, especially at lunch on a hot day.  Despite the deceptive thin strands of chewy starchy noodles, they are quite filling, in particular if you partake in the additional side dishes that accompany it – in this case, it was more of the thin strands of daikon kimchi, that were already in the bowl.  Oh and I usually down a good portion of the ice cold broth when its excellent, and on this day it was amazing!  Thin slices of beef, some cucumber and a hard boiled egg rounded out the mix.

In addition, what made this version special was it was not just regular naengmyeon, but this time the noodles were infused with green tea flour, giving it an added brightness of color and subtle flavor.  Another unusual twist to this was the toppings of the fresh slices of tomatoes.  I’d never seen that before.  It didn’t really effect the taste and actually I slid them out of my bowl to keep something visually more “familiar”.  For those with sensitive teeth, the broth probably would have affected them, but for me, at the beginning of this blistery hot day, it was spot on.  I’d rate it as simply the best bowl of naengmyeon I’ve ever had.   The broth being the key to it all.  As simple as it is, many Koreans tell me its really hard to make at home and get right so its best to eat this dish out.  I really got this point after my lunch here.