Asian desserts.  For some they are a welcomed treat.  For others, I’ve heard words like strange, confusing and not appealing as descriptors or reactions.  I will take a stab at this topic despite not being a huge sugar-goodies fan and say that one of the main causes for this seesaw result is the source of the sweetness within many Asian desserts.  That being azuki beans.  I think for most westerners, the concept of sweet tasting beans is unusual and hard to comprehend, given that beans are generally used more for savory dishes in North American cuisine.  This juxtaposition is a concept that for some, that I think is hard to overcome.  Its perhaps more a mental hurdle than anything else, that perhaps more experience can help people overcome.

When it comes to after-meal sweets in Korea, one of the things that pops into my mind right away is the summer favorite known as patbingsu.  In English, I’ve seen it being referred to as red bean sherbet.  But really, its a compilation of shaved ice, ice cream, diced fruit (strawberries, banana, etc.), jelly, bits of rice cake as staple elements and toppings.  And for added texture, some places even add in some dry cereal flakes.  I’m sure there are even more creative approaches and touches that some places add, but these seem to be the standard set from my own experience.  Of course, the a fore mentioned sweet azuki beans are always involved. 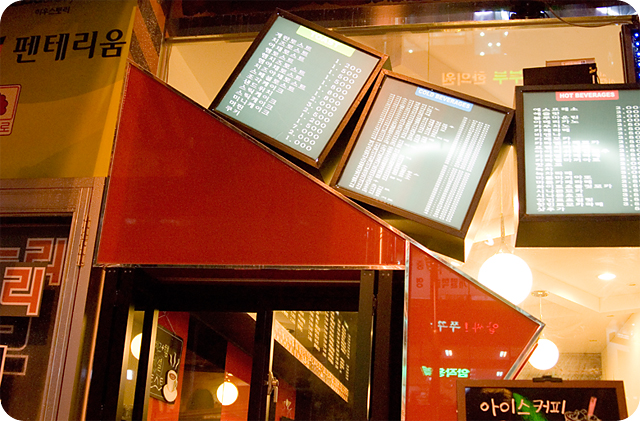 The trick or rather mainstream accepted method of eating this dessert is to mix it all up prior to really digging in.  Much like how one should eat a bibimbap, there are those that stray from this direction and eat the separate sections or ingredients on their own.  But the true bliss lies in the melding of all the flavors, textures and varying degrees of sweetness and coolness from the shaved ice.  As time goes on, the ice begins to melt and you get more slushy characteristics coming out, so its best to eat this faster rather than long and slow.  Brain freeze be gone!  Patbingsu has become so common that you can find it almost every major fast food chain, local coffee shop/dessert spot nowadays in Korea.  Coffee Mama is one such chain that is more about coffees but has a dessert menu too.

And so on a hot, humid summer day, this random stop to have a rest and cool down led us to try out their patbingsu.   After giving an order at the counter, we sat down in air conditioned bliss and I could see the two girls behind the counter begin to construct then.  After a short while, here it is as brought to the table, unmixed.   A good balance of sweetness from the ice cream and azuki mainly, further amplified by the condensed milk and chocolate sauce that was drizzled on top.  For a chain, they must have a standard formula/method of preparing this, but could not confirm it as I did not have it again at another of their outlets.

I did have patbingsu on other occasions during this trip, perhaps I’ll report on those in the future, if nothing more for pictorial comparison purposes…