ec·lec·tic/iˈklektik/
Adjective: Deriving ideas, style, or taste from a broad and diverse range of sources.

That single word that I feel best sums up what The Lions Den Cafe is all about, with  its unusual combination of Caribbean and Japanese food menu items (based on the married couple proprietors’ backgrounds), the unmissable large stuffed lion that hangs on the wall inside and the complete freestyle approach to the service.  On first glance, it may seem like your regular neighborhood diner, but delving in deeper you soon realize its quirky and unique is its own special way, that should appeal to some and perhaps confuse others. 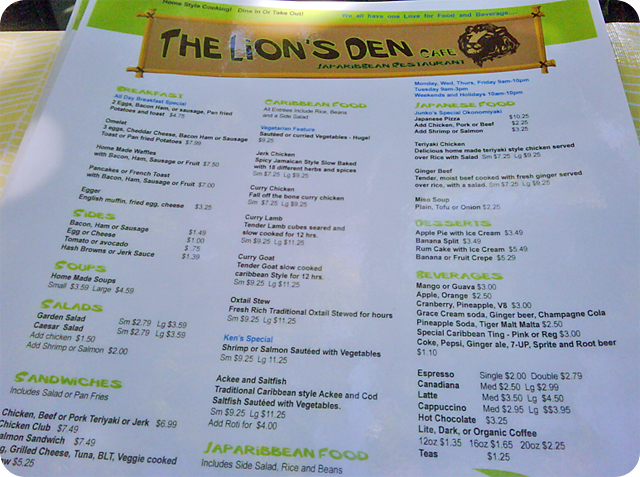 The day of our visit was a bright sunny weekend late morning.  Following a morning jolt at The Elysian Room, we headed on over to Kingsway for a bite to eat.  The hot weather resulted in all of the tables inside the establishment being brought outside for diners, and the place was busy by the time we arrived but were fortunate to get a table immediately.  After perusing the menu – initially I thought I’d try something fusion – our waitress inquired if we’d be interested in drinks and with that, I opted for one of these sweet Grace bottled beverages.  High on sugar but with ice, it was on the refreshing side. 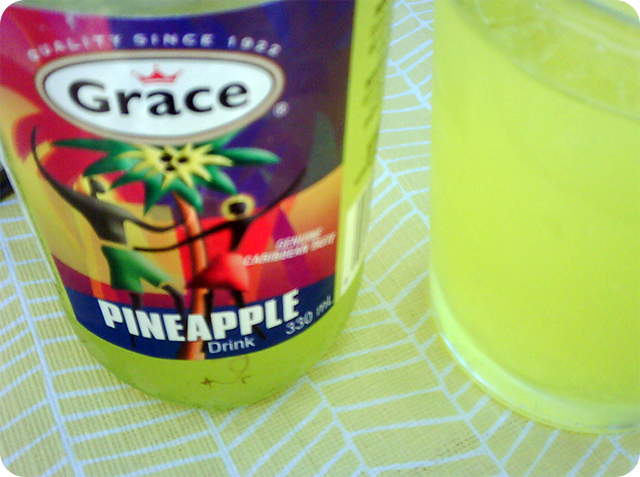 Despite everyone dining outside, it was somewhat of a challenge to get the attention of the furiously busy servers.  So much so that the main proprietor, a cheery and some might say cheeky man, came to our table to collect our order for the kitchen.  You could tell he had his routine down pat, with the swift comebackers he had when one of our table members ordered the spicy Jamaican jerk chicken entree – “What’d you call me?”. 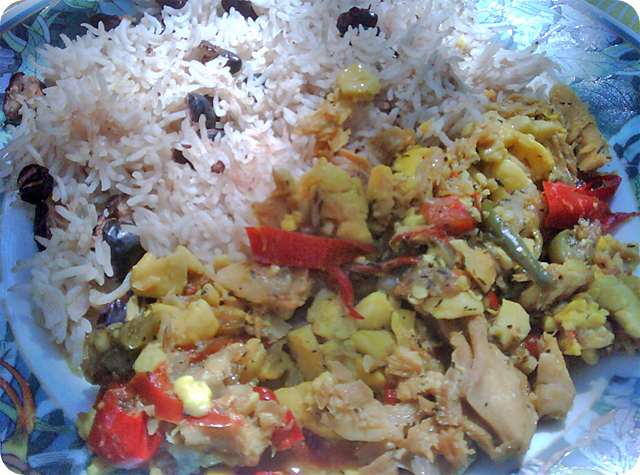 After hemming and hawing over things, and with another of our group taking what I was thinking of getting (the below pictured oxtail stew, I opted for the straight up traditional ackee and saltfish dish that was accompanied by some sauteed vegetables.   I’ve only seen the ackee fruit a few times and knew little about it and wanted to taste it in a complete meal.  The west African ingredient, is quite popular in Jamaican cuisine apparently, and featured prominently here in what is dubbed Jamaica’s national dish.   I was expected a larger fillet of fish for some reason, not this that looked more like scrambled eggs.  Regardless it was salty as advertised and a slight fishy scent that wasn’t off-putting by any means.   It matched well with the starchy beans and long grain rice, which helped cut the richness of it all.  With the array of vegetables incorporated inside, it felt like a very healthy meal and was light enough to finish off the whole plate. 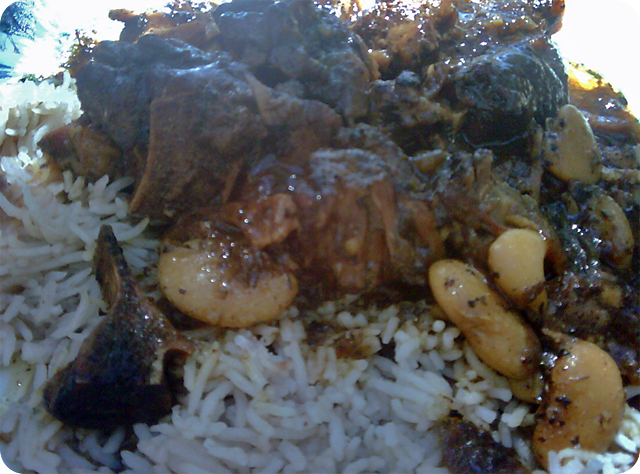 I did only have a single spoonful of this oxtail main dish, but what I had was tasty.   Tender meat, nicely seasoned and spiced, it was clear to see it had been cooked low and slow for a good amount of time.

Going to pay inside later was another part of the Lions Den adventure as that’s where y0u can come face-to-face with the beast itself.  Inquire and you’ll get again, a well prepared and no doubt countlessly rehearsed rendition of the story behind the business name.  If you’re lucky, then you’ll be asked to sign into the “book”.  You’ll also probably get a glimpse into why the food can be slow to come out, the cramped and fiercely hot kitchen didn’t look like the most efficient space to have to work in.  Coupled with the main cook (his wife) having to go out and take orders – which he publicly berated her over as it took her away from the cooking – and you get the full picture.  Regardless, its a very popular place, seemingly with a lot of local regulars who opt for the more classic diner items available.  I’m all for supporting this niche neighborhood joints amid the gentrification that’s happening in this part of town.

6 thoughts on “The Lions Den Cafe – Vancouver, BC”