Another completely random, TOFTT kind of outing.  As I dug up the Urban Spoon reference for the address to be included in this posting, I was amused to see that someone had beaten me to this place – er, make that rather bewildered that somebody had actually decided on their own to have a meal here before my impromptu visit.  Surprise, surprise, it was none other than the adventurous author of I’m Only Here for the Food! 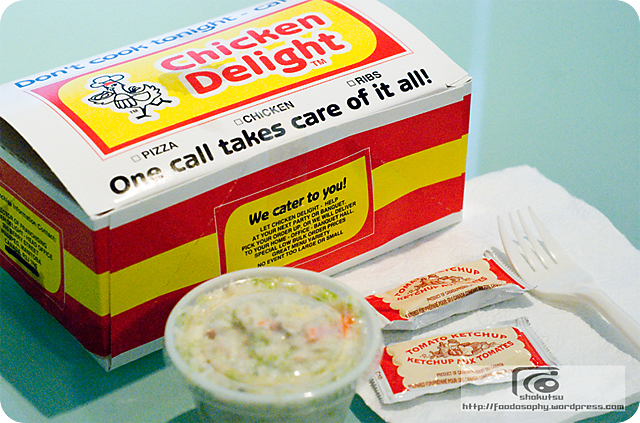 Chicken Delight only stood out as I drove by looking for a quick daytime bite to eat because of its gaudy, outdated colorful signage.  You know the kind, complete with windows plastered over in uncoordinated posters trumpeting various deals, combos and specials you can get inside.  A funny thing though, after I stepped inside (and became the only customer) I learned that one of the items on their posters wasn’t even available.  False advertising at its finest.  Its you can’t order it, take it down please.

Despite it being open already for the lunch hour, I was worried about the kitchen.  Would the vat of oil no doubt used to fry the majority of their food be heated up appropriately?  Would they be using fresh oil?  I tried to put those doubts out of my head as I opted for the three-piece chicken set, that was accompanied by French fries, a simple dinner roll and coleslaw.  Two drumsticks and a chicken breast was what came in my take away box.

I should note it was a good twenty, twenty-five minutes before I was called over to pick up my bag from the counter, so my questions about the kitchen were somewhat confirmed.  When I got to a spot to start digging in, the first thing I noticed was the exterior crust.  It was that really uniform, smooth fried skin, no texture to it and it peeled off like old wallpaper coming off under a hot water sponge from the wall.  Throw in the fact that it was on the overcooked side, and was inadequately seasoned, the meat just had no flavour.   The above pictured cole slaw, I took half a forkful of it and it was enough for me.

Strangely, the fries were much lighter in colour and undercooked in comparison to the chicken.  Your average commercial prepared kind, nothing to get excited about.

Chalk this visit as one of those made ONLY for the fact that I was desperate for a meal and needed to go someplace where I was that I hadn’t yet visited and written about in this part of Burnaby, almost into New Westminster.  For this price, you’re perhaps better off to hit one of the major fried chicken chains (KFC, Church’s)  if this is what you’re fixing for.

3 thoughts on “Chicken Delight – Burnaby, BC”