Oozing simplicity from its pores, beginning with the subdued decor and partitioned dining space, Rikka Japanese Kitchen is situated not far from the entrance to the New Westminster SkyTrain station.   As a result, the characters outside the restaurant are on the doggy side, and its clear some of those scraggly folks are trying to treat the nearby businesses are their own personal washrooms (signage in place telling them its just for customers) and kitchens (e.g. while I was waiting for my meal to be brought to my table, a strung out woman came bursting in and started aggressively shuffling around the sushi bar counter and then loudly demanded “where’s your plastic forks!?”). 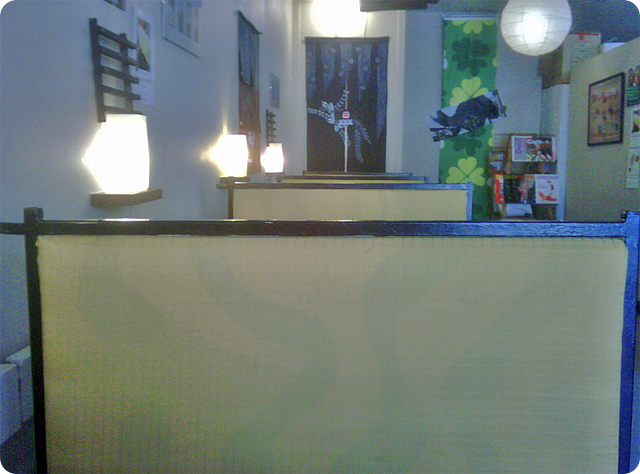 With the lunchtime business seemingly one of their major draws, given the dozen or so price friendly ($8~$9) options, I had made my way there for a sit down meal.  Parking is a bit iffy, so if you drive, I suggest you try to find one on the road a block or two along 8th where they have yet to install parking meters.  A sandwich board outside on the sidewalk is their main promotional tool for these lunch deals, so don’t be surprised if you’re not the only one drawn in. 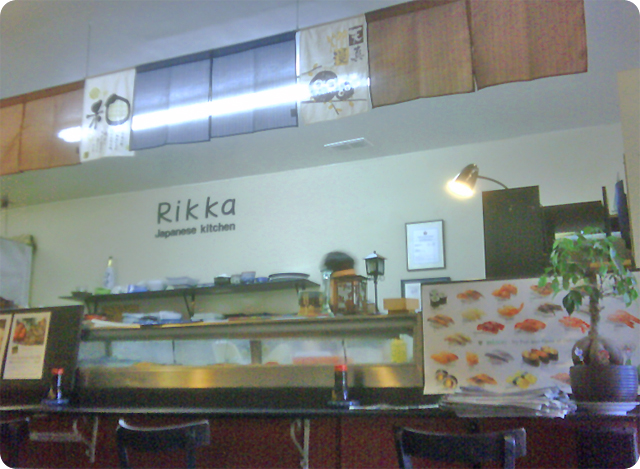 Staffed by what appears to be only two people at lunch (a lady who handles the kitchen/serving and a man who is stationed at the sushi counter) I was directed by the woman to one of the side booths and given a menu and a cup of hot tea.  Not surprisingly, the menu featured a lot of teriyaki-flavoured specialties on the menu, perhaps catering to the local crowd still working up the courage to partake in Japanese cuisine. 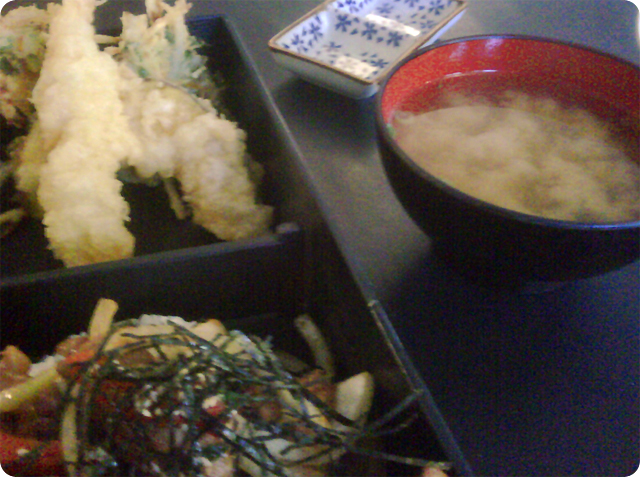 Putting most of the early menu listings for lunch aside, I opted for the pork shogayaki.  In fact, this was more bento-style with the other quadrants of the set comprised of some lettuce salad, assorted tempura and a skinny California roll.  And a side serving of miso soup to complete the meal.

The shogayaki was unlike what I expected (just thin slices of cooked marinated meat), as it had some julienned slices of red bell peppers, thin slivers of nori, and some onions.  Decorative, yes.  Traditional, no.  I think it was just to add some different texture as well and to make it appear more “filling”.  But again, not what I was hoping to get when it came to my table.  The flavoring was heavily skewed on the ginger side, which is what you’d expected from this dish, but perhaps a touch overwhelming despite the additional flavors coming off the veg.

Among the other items, I did enjoy the tempura – lightly battered and not too pipping hot.  Crispy yet not overly so and the color just right.  The salad was fresh with a light tasting vinaigrette.  The California roll, not something I usually enjoy, but when its a skinnier version and just a few pieces, I can handle it if its fresh.  This also wasn’t overloaded with mayonnaise, much to my liking.

A value, freshly-made and attractive combination of varied ingredients to form a complete meal.  This bento-box was just what I needed as a fairly quick and easy eat-in meal on a short break in the area.