The West Kensington neighborhood I found to be an interesting place to stroll around.  Mainly functioning as a residential area, its streets were relatively quiet during the day and empty aside from the passing commuters on their way to work.  And at night, a slightly eerie silence engulfed the streets as I meandered about with my camera and only saw a few folks out walking their dogs in the darkness.  For fans of classic architecture, being in this place makes for a lot of neck craning, with all of the attractive multiple-level, terraced Victorian-style buildings.  I noted a few for-sale signs posted outside some flats, no doubt not the cheapest place to buy real estate in town.  I thought it would be fantastic to live in a neighborhood like this, with plentiful access to transit and assorted shops and eateries located nearby.

One morning, jet-lagged and finding myself awake at 5am despite only turning the lights off in my room just four hours earlier, I took part in a must-do activity in London – have a hearty English breakfast. Near an Underground station was a simple greasy spoon that served just that, and I happily stepped inside George’s Cafe. 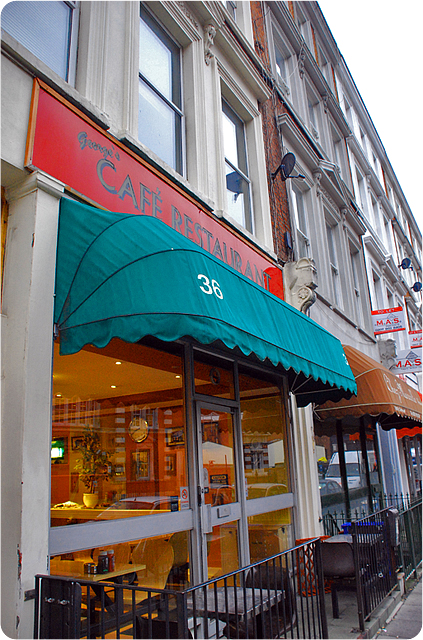 Towards the back was the kitchen that was fronted by a cut out counter where you place your orders and were greeted by a boisterous, brawny middle aged man.  You could sense the pride he had in his place and his interest in serving his customers.  Faced with a daunting menu board hanging on the wall, I knew what I wanted but was intrigued by what else was there – plenty of lunch time items as well I saw.  Before I knew it, we made eye contact and he asked what I was having.  Their popular breakfast I said, and got it with the potato hash.  When asked if I wanted “white or black coffee”, my still dazed, PST-time zone mind couldn’t take it in as I was confused as to what white coffee was, until I got the black and realized he’d meant essentially “you want cream/milk in that?”.  Oops.

A bunch of locals were also eating inside.  A mother and her pre-teen aged child.  A pair of twenty-something lads dressed in overalls who looked like they had a long day of construction work ahead of them.  And a seemingly senile older man dressed nicely in a suit who walked in with a limp, was seated at the table right next to me.   As I sat there trying not to appear like I was taking photographs,  a delivery crew was bringing in some supplies through the front door, and when they had it propped open too long resulting in a brisk breeze flooding the space, the owner raised his voice and was visibly annoyed at the act.  Ah, love that British sensibility and straight talk.

Following a short wait after I made my choice,  my breakfast plate was delivered it to my table.  The potato hash browns sadly were straight out of the frozen food aisle of your supermarket.  The sauteed mushrooms, very thinly sliced and well cooked through.  The bacon was pretty weak, more fat than anything else and the single sausage nothing to write home about either.  Normally I’m not a fan of baked beans, but gave these a try and yes, I’m still not a huge fan.  An unsalted/unpeppered fried egg rounded out my plate.

Perhaps it might not look like much but this was pretty plentiful for me at this early hour.    Flavor-wise it was well short of spectacular, nothing I couldn’t get anywhere else in the neighborhood I imagine, or even around my own home in Canada.  But just the sense that it was London, in the early morning hour and I was eating this while I heard all that accented English chatter around me, brought a smile to my face.