Its not exactly a love fest when you scan the online reviews of Dai Sushi. In fact, it reads like a pretty mediocre and poorly serviced establishment. Of course, I learned this too late and experienced it firsthand after my own impromptu visit for a quick, random dinner with an out of town pal in Burnaby.  With a roundly popular Japanese restaurant (Nao Sushi) just a few doors down in the same complex, it makes me wonder how this restaurant continues to survive.  Let me explain… 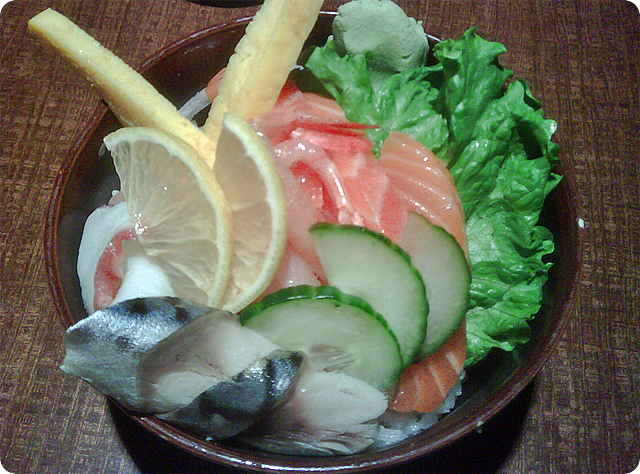 Knowing full well that it wouldn’t be an elite dining experience, I decided to opt for the chirashidon.  The reason I tend to do this is so I can avoid some really horrible nigiri sushi (that can be reasonably expected from such a place), but at the same time get a chance to sample how their sushi-use rice measures up.  The verdict here is that the toppings were on the light end, and whoever designed this dish was relying too much on the useless garnishes and veg.  The saba was fine, though the salmon was pretty weak in flavour much like the bland type I had before in Singapore.  Some slices of tako and pieces of amaebi hidden underneath. All in all, a big disappointment, rice included. 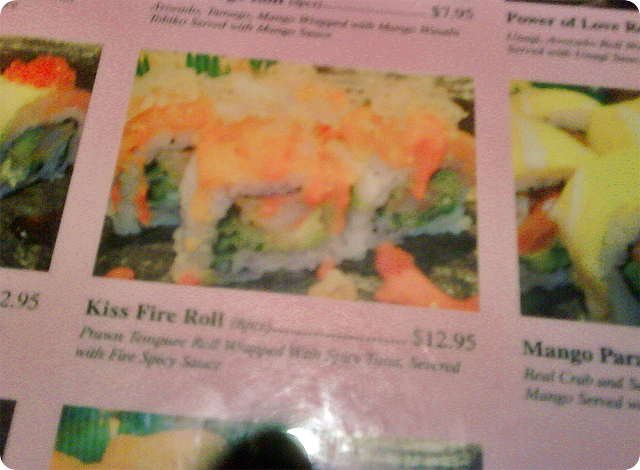 Not sure what it is lately, but some folks I know are loving the crazy maki craze.  This visiting friend was one of them.  Sadly, we had more of this madness later in the week at Genji.  Rather than get into some big debate and express how I truly feel about them, I let him go ahead and order this wacky creation known as the Kiss Fire Roll.  The image is fuzzy at best, but it had a prawn tempura rolled up with spicy tuna (another pet peeve), all covered in a colourful “fire spicy sauce”.

And pictured above is the roll in living colour.  I can’t even discuss this without shaking my head.  And no, I didn’t even sample a piece, so can’t give you the rundown on the taste.  My friend did mention that it was insanely hot however, and given the name, I guess that was appropriate. 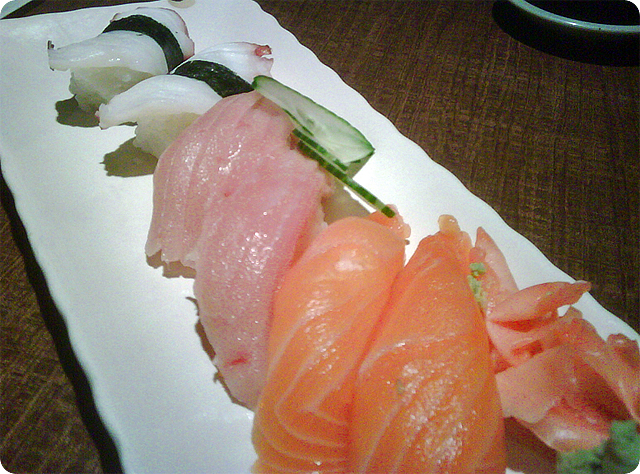 To round out our meal, I had to order some nigiri, in light of the first two dishes being less than to my satisfaction.  I decided to play it safe and order some my friend would like – shake, maguro, tako.  As it was brought to the table, I immediately spotted something very weird.  For a closer look, let’s move to the next image…

Yes, a hole!  Clearly visible in the thinly sliced salmon of the nigiri on the left.  I honestly didn’t know how to react to this, as I was in complete shock as to how the “chef” behind the sushi bar could even allow this to go out.  Its this kind of lazy attitude that makes me worry about the further degradation of this cuisine as it spreads in North America.  Unacceptable in my books and thus a big thumbs down to Dai Sushi.