Despite being called “the most important meal of the day”, I often find myself skipping breakfast and making due with a cup or two of coffee in the morning.  I applaud those that make the effort to start their day with a hearty meal instead of doing without, or just wolfing down whatever last night’s dinner leftovers might be lying around.  On weekdays, I just can’t gather the energy to make breakfast, and even on weekends, despite the luxury of more time, its not one of my favorite things to do from a food perspective. 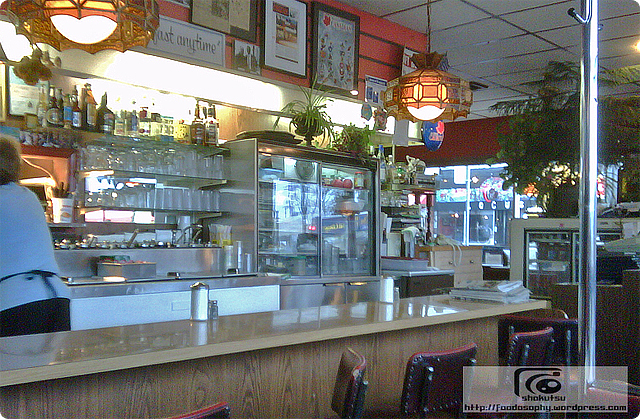 Also, is it just me or is it getting harder and harder to find a local joint that serves up a quality, satisfying breakfast service, AND at a reasonable price?  Just my opinion but I get the sense that too many places are trying to “get with the times” and make this part of the day more “fancy” than is ever needed.  Which in turn, results in one plate breakfasts breaking the ten dollar and over barrier, which is something I can’t fathom.  To me, some eggs, potato hash, bacon/sausage and some toast should (or at least I wish) hover around less than half that.

Helen’s Grill & Restaurant retains an old school, days-gone-by feel to it.  The well softened booth seat cushions, the tacky plastic-y leather stools at the counter bar, decor, ratty menu booklets and the abundance of retro juke boxes at each table (plus a huge one at the back of the room).  I imagine many would say its in desperate need of a makeover, but for me, this whole package is part of the appeal.  Heck, even the server (who I seem to always get) reminds me of a previous era of waitressing.  Bold, very vocal and routinely coming by to top off your cup of doggy joe.

I’ve visited on several occasions now, mainly due to convenience.  When it comes to my perceived value of simple breakfasts, it probably fails in that regard to completely fulfill. First off, their basic breakfast options aren’t on the low end of the price scale nor are they in the upper deck.  For what you get though, I feel that its pricier than it should be.  Let me try to expand on this through the two visuals below… 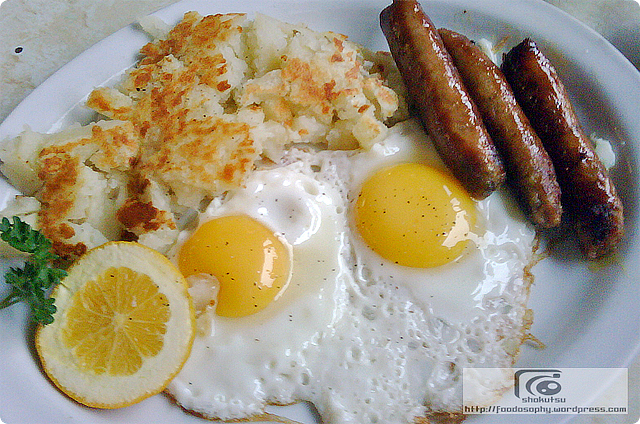 Actually, there is nothing different in the order aside from the sausages being swapped out for ham in the other.  And yes, the broken egg below came like that when it was brought out to the table.  There’s a pet peeve of mine. 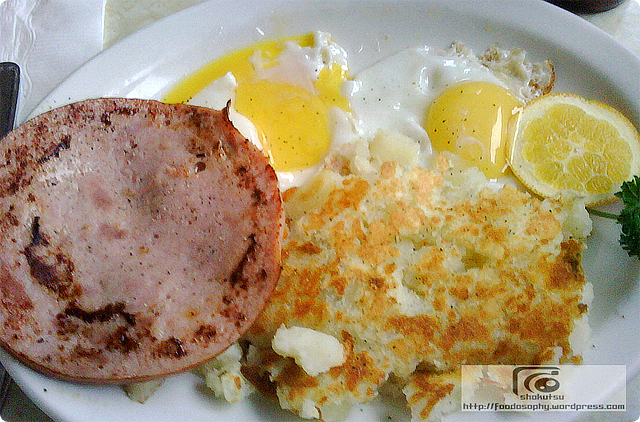 One thing that stands out, is their hash.  Decent sized chunks, for those that like it that way, nice and soft on the inside but with the crispy outer crust from the flattop.  Eggs (sunny side up) done delicately, perhaps too much so in the case of the broken one.  The ham/sausage nothing to write home about and your run-of-the-mill stock variety.

I think these two meals, with cups of coffee, taxes and tips approached $18~$19.  Is it too much or just right?  I’ll let you decide on your own…