This is just a hunch but I have this feeling that right up there with posts on sushi, pizza is a very close second here on foodosophy.   Both in terms of the number of entries and also the variety of locations that its been consumed by our writing staff.

I thought I’d contribute more to this food item, though I am not as knowledgeable as the likes of foodosopher and gastronomydomine, with a write up on a place that I’ve often passed by but had never gone into, until recently… 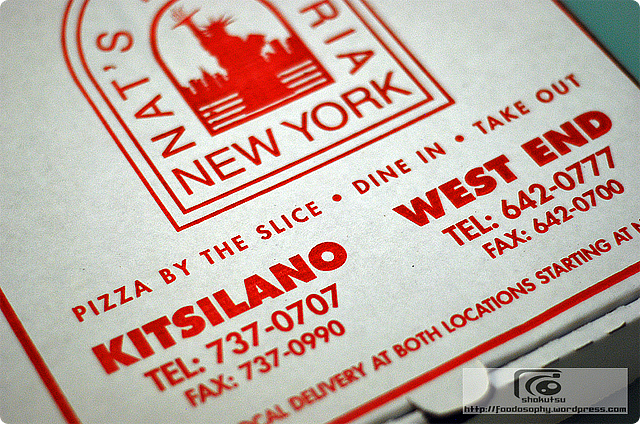 Nat’s New York Pizzeria has two locations, one downtown and the other in Kits.  As the box notes, they offer pizza by the slice, eat in and take out options, as well as delivery.  The West Broadway location which I visited, was decorated quite enthusiastically in various kinds of New York-themed paraphernalia.  Also spotted were many pictures of people (staff?) on fishing trips showing off their catches over the years.  Clearly, there is a comfort level here in decorating to their tastes/liking.  For me, it seemed a bit tacky and artificially-New Yorkified (that a word?). 🙂

The open counter in front of the ovens held some pre-made pizzas (uncooked) laid out on display to give people a clear picture of what they could expect.  I wondered how long they might have been sitting there.  Staffed by about seven late-teens/early-twenties boys, it seemed that a frat house atmosphere permeated among the staff, with them joking around while ignoring those of us in line to order. Brushing that aside, we were able to choose two types, one heavier on the meat toppings, the other loaded with spinach, other veggies, etc.  Our server tossed them into the ovens and it was about a ten minute wait before it was boxed up.

As it was a quick meal for me and my friend, we got the two slices to go.

Or should I say rather that we got two slices of pizza topping cardboard.

Man, this crust was tough.  Took great effort to bite through.  Definitely way overcooked.  No delicate flex at all, something I’d expect from New York-style pie.  See this “bending” action below?  I thought the thing would snap in half.

For those looking for that gorgeous “leoparding” appearing on the bottom crust, don’t expect it here.

I sure hope no true New Yorkers come here for a “taste of home”, especially when many could be on there way here for the Olympics.