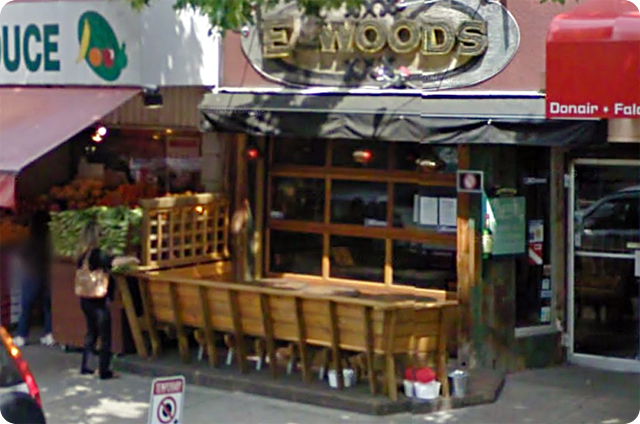 Along this end of West Broadway, pubs are quite well represented. Perhaps its due to the relative abundance of residential areas just blocks off on each side of this corridor, and the proximity to the University of British Columbia campus. So if you like to have a quick pint after work in your neighborhood or on the way back home from a busy day of classes, this stretch has several options for you (Coppertank Grill, The Shack, Gargoyles, The Wolf and Hound, etc.).

Elwood’s is also among the possible options.  Occupying a tiny narrow space with a rather subdued facing, you might miss it if you’re driving past.  When the weather is warmer, the outer garage door-like patio area is opened up (just a few round table tops there outside, hidden behind a wooden barrier), and I find most people like to sit towards the street.  As they used to say in that old beer commercial, there are two seasons in Canada: winter and patio.

Pub grub, when the occasion calls for it, is great comfort food.  Opposite to my preferences for izakaya, when it comes to western pubs, food is my main goal.  And when it comes to the menu’s at pubs, burgers are first and foremost on my attack list.  The ones at Elwood’s came with some good recommendation, so I ordered what I believe was called either the “Canadian” or “Maple” burger, that came with a side of fries.

A very manageable sized beef patty, with a nice char on the outside from the grill, was topped with some cheddar and bacon.  The accompanying veggies were all very fresh.  I really enjoyed the juiciness of the patty and the way it held together, unlike so many other burgers that are much bigger and seem to crumble apart once you are someway through it.  The paired fries were very nice as well, just reaching that balance between crispy and soft, seasoned with salt & black pepper.

A note about the service.  It seemed not too intrusive and timely.  But we had a strange episode with ours, as while engaged in a conversation, we heard the splattering of some liquid.  Turning around to see the bar area, we noticed that the one of the taps on the beer counter was on and spewing onto the floor at a rapid rate.  Standing right there with their back to this waterfall of brew was our server – and completely oblivious to what was going on.  Not able to stand seeing such good suds go to waste, this was brought to her attention.  Found it odd that she could not have realized what was going on just a meter behind her.

So to sum, a sunny weekend afternoon, a few pints of beer and interesting conversation, coupled with this great burger plate in a relaxed setting, and a bewildering experience with a ditsy server, Elwood’s had it all on this day.  🙂

9 thoughts on “Elwood’s – Vancouver, BC”