In Mexico, tortillas are considered a staple food. Typically made from Masa (corn flower) and not the flour tortilla that is common in Northern Mexico and the US, much of Mexican cuisine is shaped around the “lowly” tortilla. These flavourful corn wrappers deliver dishes from tacos, to tortas, to enchiladas, to tortilla chips. Sadly, their usage in Calgary has been generally limited to the bland, less nutritious version, the flour tortilla, mostly because the only corn tortillas available to us have been imported at great cost, and are usually less than fresh, or previously frozen. Mexican food is also definitely lacking in this city. Thankfully, there is a new option in Calgary – Las Tortillas. 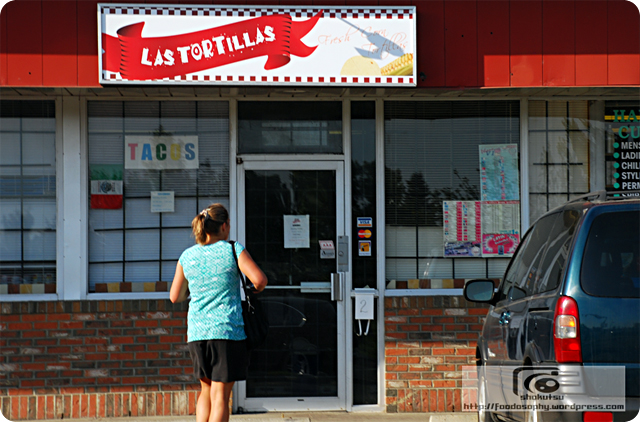 Las Tortillas is a small Mexican grocery store in NE Calgary that makes their tortillas by hand. With a small tortilla press, they make stacks and stacks of fresh tortillas, which they sell for $5.20 per kg. A Kilo usually means 30-36 tortillas.

My favorite use of the corn tortilla is in tacos – double layered corn tortillas topped with a meat filling, cilantro, radish, lime juice, hot peppers, and salsa. Flavourful, braised meats lend a great contrast to the freshness of the condiments, and the chewy, nutty corn base. Thankfully, Las Tortillas carries 3 meats – beef (barbacoa), chicken (tinga), and pork (al pastor). They sell shrimp tacos on Saturdays.

The chicken is hand pulled and well spiced. Not dry, they are bursting with flavour that one is often hard pressed to find in chicken. The beef, a barbacoa by name, is a similar texture, and also full of flavour. All meats are cooked on an open electric flattop griddle. Not exactly the most efficient, or the tastiest way of cooking Mexican food, they nonetheless do the job.

As much as I like the tortillas, and the tinga and barbacoa, I am not a huge fan of the al pastor or the shrimp at Las Tortillas. The pork is a bit dry, though it is nonetheless a decent taco. The shrimp tacos, which are made from frozen shrimp pulled from the bag, and covered in cheese, are tough to swallow.

Aside, from some Mexican grocery items, that is all that Las Tortillas carries. And even though I would prefer better taco fillings (carnitas, lengua, suadero, trippa), for a city starved for Mexican food, this is the best i’ve found. Yes, better than Mi Tierra, and Boca Loca. This is a big leap forward for Calgary. People argued we werent ever going to get authentic Mexican in Calgary (or, something outside the non-Baja Californian Mexican anyway), but Las Tortillas is a good start.