Perhaps its relative geographic obscurity on the far west side of the city, the unassuming and some would say uninviting exterior facade or just the power of rumors, but it seems to me that Café D’Lite has a unique impression in the minds of many Vancouver diners in that although popular, reports of its demise seem always front and center.  Call it the Mark Twain of the city’s restaurant scene. 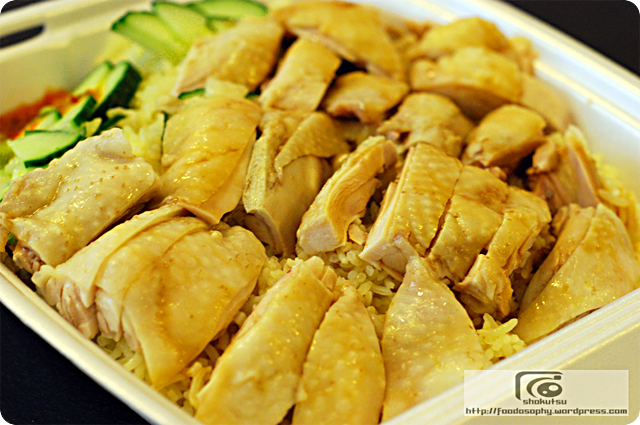 I’ve dined there several times over the past few years as its the closest spot for me in satisfying any cravings for Hainanese Chicken Rice (their “house special”), but on my most recent visit I decided to get a take away order as I was in a hurry.  Pictured above is the large size ($11.95), which is more than enough for one hungry person.  Unfortunately, the non-dine in order of this does not include the soup as a takeout item – I didn’t ask but assume its their lack of appropriate styrofoam containers.

While the absence of the soup was a letdown, it was not as large as the disappointment I felt when I returned home and opened up the package containing my meal and realized that the traditional condiments were not really there.  As the image above attests, there was a small dallop of chilli sauce, with a small spoonful of a ginger sauce added in the corner of the container, but no dark soy sauce!  In hindsight, I wonder if you had to ask or pay for that separately…?

The chicken itself was a bit lukewarm, probably from the time it had spent layered over top of the rice (which itself, was not so flavorful and somewhat drier than I like), but the meat’s texture was tender.  The thin layer of skin was not overly gelatanous, which can be good or bad depending on your personal preference, and the boneless factor made for easy eating.  All in all, not the best version of this southeast Asian creation I’ve ever had (too many great ones I’ve eaten in Singapore have ruined me), but not horrible as to not wanting to ever have it here again.

I must try to remember to order some of their other dishes such as their Singaporean Laksa or their Malaysian curries.  As long as they continue to operate and get the customers that are aware they are still in business, I’m sure I’ll be back and among them.