Blending two food cultures cannot be an easy thing. With the restaurant industry in any major city comprised of a large number of immigrant cuisines, they face a tough challenge. Trying to accurately balance authentic native cuisine with the tastes of their newly adopted country. If the purpose is to service people from their birth country, then they have less to be concerned about. But from my own observations, this typically fails to work – most restaurants need a fairly diverse clientele to succeed in the long term. This is a challenge very much in evidence at the Green Grato.

Green Grato serves Carribean and Canadian meals. Ignoring the pizza, wings, and other Canadian dishes, their primary focus is on classic Jamacian dishes. Jerk, brown stews, roti, ackee and salt fish, rice and peas. A lot of Jamaican food is quite approachable for the general masses – with the actual spicy “heat” level of each dish being the only real issue for the general populace. For me though, Jamaican food is all about bold, punchy flavours. Big flavour, lots of happiness in one place. 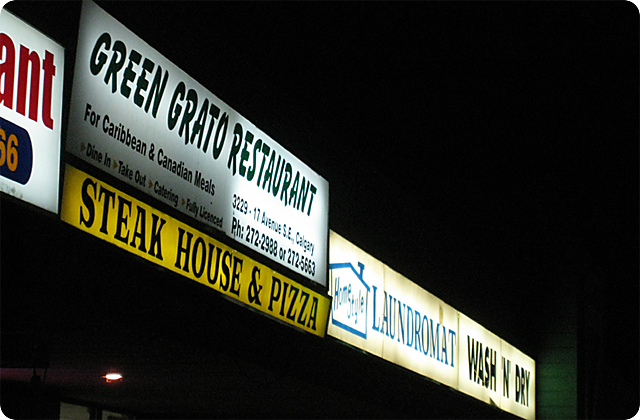 Located in a large strip mall just off 17th Ave SE, the location leaves a lot to be desired. During the day, it is a long way from the high worker density areas of downtown, and NE. At night, the area often slows down – shops close early, and many people avoid the general vicinity. It’s too bad really, as some of the more interesting restaurants in the city are in the area.

The location is reasonably clean. And never busy. In the 4 or 5 times i’ve been, there has never been more than one other table. The decor isnt anything to write home about, a bit tacky to be honest, but there’s nothing uncomfortable about the environment overall.

For me, i have certain dishes i use to measure the standards of quality for Jamaican food. Brown stew, Jerk, Curry, Roti and patties. If you’re like me, then you like a little diversity in your meal. Thankfully, Green Grato serves combination plates that allow you to combine two entrees with rice and peas into one plate.  This day, i ordered brown stew chicken and curry goat.

Oddly enough, they are sold out of rice and peas, so we get just rice. The brown stew chicken at the Green Grato, as on every other day i’ve had it, is excellent. They do a wonderful job of capturing the long stewed flavours of onion, tomato, and thyme, and great balance of sweet and savoury, that along with the addition of some pepper sauce, brings all key flavours into agreement. This is great flavour. The curried goat is ok – nothing amazing, and nothing terrible. The flavours seem dumbed down a bit.

My favorite Jamaican dish though is jerk. Jerk pork, which the Green Grato doesn’t have, is the most amazing, complex dish. Jerk chicken is a nice substitute, but lacks some of the full bodied flavour of the pork. Sadly, the Green Grato rendition of the jerk chicken is both bland, and boring. The sauce is ok, but they bake the jerk, which leaves out a key element for me – the smokiness. The spices, the heat, and the acidity aside, the smoke from the grill makes jerk. And theirs just doesn’t have it.The overall flavour is very safe, and very boring.

Finally, the roti. I’ve never really been able to distinguish between the different Caribbean roti’s, but i know i like them. These Indian inspired dishes are perfect comfort food.  Wrapped in a thin wrapper, and stuffed with a curried, tender filling of assorted ingredients chock full of flavour. On this day, we opted for chicken. It was a very large serve, heavy with filling, and moist. A nice blend of curry and rich chicken flavour.

Overall, i’m a bit torn on how i feel about the Green Grato. In some ways, they deliver excellent food. The brown stew especially is quite good, and delivers some excellent flavour. The roti and curries are serviceable. The jerk, unfortunately, is pretty sub standard from the glory of what jerk can be. I guess when asked, i would go back and I would eat there food. In that regard, they do a good job. But in terms of the food itself, i feel the soul of Jamaican food has been compromised. They do deliver good quality food at a decent price, but it doesn’t speak to me the way Jamaican food should. And some of those compromises are disappointing – illustrating just how tough a balance it can be.