Now if you are at all familiar, you know that authentic Japanese ramen in Hong Kong is hard to come by, even in that food crazed place. Amid all those miserable, wannabe places serving up their Hong Kong-interpretations of the dish, many of them with weak, one-dimensional broths that are always dreadfully lukewarm (why is that?!?!), you will appreciate Ramen Santouka coming into this market and straightening things out before the perception of ramen in SE Asia hits rock bottom. In essence, I am looking at Santouka as the guardian of ramen in this part of the world with their recent entries (July 2008 – Hong Kong; January 2008 – Singapore), and appreciate their efforts in this culinary fight against more poor “copies” out of China.

With their humble beginnings in Asahikawa, located in the upper part of the northern Japanese island of Hokkaido, Ramen Santouka began as a simple nine-seat shop in the spring of 1998. The proprietor started out the business with a basic premise – to serve the best ramen he could to his family – I know, it sounds like something out of that cult classic flick “Tampopo“. They further built upon this motto by striving to achieve what they call a ramen that “is easy to understand, and that can be eaten many times over the years and you won’t tire of”. With this simple start, an capitalizing on the popular boom in shio-tonkotsu ramen, the Santouka empire has grown over the past twenty years into what is fast becoming an expanding global operation – as along with its 44 outlets spread throughout Japan, it now boasts 8 overseas branches (6 in the United States, 1 in Singapore and 1 now in Hong Kong). I’d say they have achieved their early goals.

Having been familiar with Santouka’s offerings from eating at their Shibuya and Shimokitazawa locations in Tokyo over the years, I was pleased that my recent visit to Hong Kong enabled me to sample it in their latest overseas venture. With the extreme popularity of the JUSCO hypermarket (run by the Japanese AEON group), I immediately learned that Santouka will not have any issues with foot traffic. I believe in America, they have followed the same strategy by placing their outlets within existing Japanese food/cuisine-friendly confines such as shopping centres catering to the local Japanese community, etc.  As you fight through the hoards of traffic, the moment you enter the main doors and walk down the steps to the first floor, you run smack dab into the window display and entrance way of Santouka. Their distinct noren, complete with their trademark backwards spelling of their name is retained, along with some supporting flags bearing the same characters.

Nearby are other notable Japanese shops that have been transplanted here, selling sweets, desserts, etc. but Santouka clearly garners most of the attention here. An impromptu waiting area made up of about twenty stools closed off by a taped-off series of poles, try to prevent waiting customers from getting in the way of the people headed to the supermarket section of JUSCO. On this day, the seats were all occupied as I arrived on the early Saturday afternoon (regular business hours are 11am to 10pm with last order called at 9:30pm), causing one staff member to come outside and pass out menu booklets to give those waiting a chance to see what could be had inside and also pre-order. 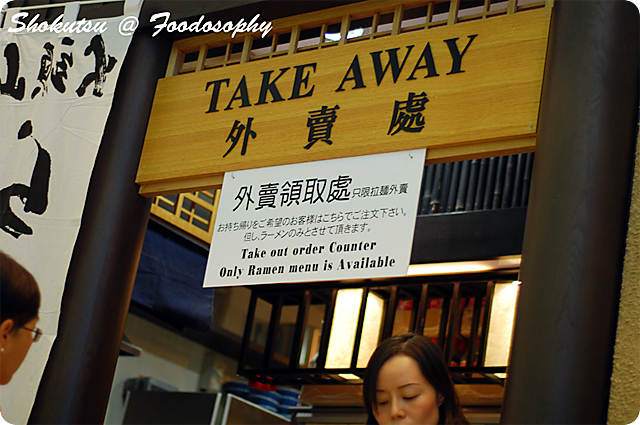 A smart strategy, as it not only built up the anticipation but also helped give the hurried kitchen a chance to know what was coming. For those in a rush and unable to wait, on the other side of the place was a take away window, though only ramen dishes were available. I am not sure if they put the soup and noodles in separate containers for this, but wonder why anyone would want to eat ramen as take away, as for me part of the experience is eating inside a ramen-ya.  You would think that non-ramen dishes would be better suited for take away, but hey that’s just me.

As I was more interested in catching up with an old friend who had come down from Guongzhou just to see me on my trip, I didn’t really catch much of what was going on around me – though I did feel the tables were fairly closely put together (resulting in plenty of stares when I whipped out the camera from my bag and started shooting away). After about a twenty minute wait after being seated inside, our meals arrived. With the last of the late-summer heat still present outside, I elected to go with the Tsukemen (cold noodles, with the hot broth used as a dipping sauce), and an Ikuradon to add more volume as I was feeling quite hungry.

The noodles were of a thicker variety (as you get in their Japan outlets), perfect for this dish as the broth clung beautifully to it, probably aided by the difference in temperature between the soup and the noodles. The tonkotsu-shoyu soup was as bold, fragrant and teetering on the delicate line between sweet tones (from the vegetables and sanma used in making the broth) and savory as I remembered it. Inside was a boiled egg, menma, onions, nori, and chashu. For some people, I could see them saying that this is on the salty side, but for me, who prefers stronger flavors, it suited me just fine. It is always so nice though, to find that even after several years, and in a different country to boot, that the memories I had of the soup were intact and well represented by the Hong Kong branch. 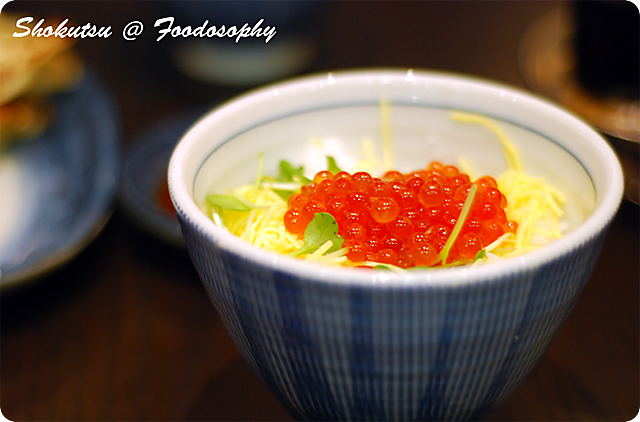 The second component of my meal, the Ikuradon, was nothing special. The rice was a tad undercooked (or had dried out from sitting in the bowl during prep), but the ikura itself was fresh and full of that tantalizing pop when you bit into each morsel. For its small size, it was just right in terms of adding some more volume to the combination meal. I think others around us had not seen many people eating a ramen bowl and a rice dish together, as I got some inquisitive looks (and this was after my camera was put away).

The challenge in making sure an original dish is duplicated successfully by the same food operation is critical in any expansion plans. For without it, you will run into those customers who know the basic offering and compare it negatively to any offspring and say that its not the same. That alone will end your path to business growth. Not to mention the countless other first time customers who will come away saying that it is not good, without even knowing the rich history and taste properties of the main menu items that exist at the home base. I suppose whenever I visit a branch outlet of a personal favorite/well known restaurant, I am reminded of a quote from Michael Jordan that went something to the effect of “I play hard every game and give it my all, because there will always be someone out there in the crowd who is seeing me for the very first time”.

I think food and restaurants should hold that same standard, if they are courageous enough to operate and even more so, when they are actively growing their operations organically and taking steps out of their home base (or country for that matter), for many will have an impression built up in their minds of the original and demand it, time and time again. Santouka has succeeded in this regard in my opinion, bringing to Hong Kong a solid ramen selection, that is on par with what you get in their Japan-based outlets.  Job well done!