Normally I love hole in the wall kinds of places. Small, low prices, occasionally dirty places, with an authentic vibe and a hodge podge of interesting characters for clientele. Something about them just feels…real. But rather than get caught up in the idea of the hole in the wall, it’s important to judge them based on the food.

I have some friends who love these kinds of places – and have been visiting the same ones for years. They like the way they are treated, they like how the establishment knows their order, and they like how comfortable things have become. However, when they brought me to their favorite hole, what mattered most to me was the food, and it was terrible. I couldn’t taste the kind treatment and the years of emotional investment, but what i could taste wasn’t for me. Gee Gong reminds me of one of these places.

Gee Gong serves Cantonese cuisine, and has been located in Chinatown in downtown Calgary for a very long time now. Well regarded by many foodies as a classic hole in the wall choice for Chinese cuisine, it has many of the hallmarks of one. Small, slightly dirty location, with fairly inexpensive prices. At any given point, it could be empty, or full, with people enjoying the things they are best known for – Hot and Sour Soup, BBQ, noodles, and hotpot. Touting itself as “Authentic Chinese Cuisine”, i’ve never found that slogan to be all that inspiring. 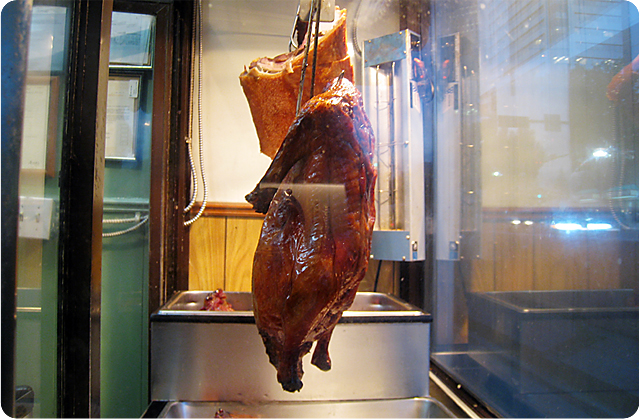 With respect to the food, I’ve never had the hot and sour soup, so I can’t comment on that. The hotpot and noodles are both reasonable, but there is nothing special nor remarkable about them. The noodles are a bit greasy, and the hotpots fairly sparse, but they are certainly edible, and for the price (which has gone up in the past couple years), are quite reasonable.

When discussing Gee Gong, most people talk about one thing and one thing only – the BBQ. Like most Chinese BBQ, they offer the standards of roast duck, roasted pork, bbq pork, sausage, and chicken. A lot of BBQ really comes down to personal flavour preference, but all Chinese BBQ should be the same. Moist, flavourful, and well balanced – salty and sweet, crisp and soft.

The BBQ at Gee Gong does not suit my preferences. A little bit dry from over-exposure to heatlamps, it is nonetheless flavourful, yet quite greasy. My biggest issue is the bbq flavour –  overly sweet and sticky, it lacks the depth of flavour and balance i prefer in my BBQ. There are better choices for BBQ both in Chinatown, and outside of it.

Overall, I know it seems odd, but I don’t have too much criticism for Gee Gong. The food is edible, and reasonably priced. It certainly is nothing special, but i wouldn’t complain if i had to eat here either. My issue is, as a hole in the wall, with no decor, and no real redeeming qualities other than the food, the food falls flat. It is bland, uninteresting, and I expect better. After all, when you’re not there for the service, or the decor, you better do a darn good job with the food. And they don’t.