[As with all of our posts, please click on any image for an enlarged view]

When a place puts in its name, one dish that its supposed to specialize in and do very well, I tend to have high expectations.  After all, if its in the name, they better have game.  Unfortunately, the House of Tofu Soup did not live up to what I was hoping for in terms of their soondubu (Korean Soft Tofu Stew) and I came away quite disappointed.

The House of Tofu Soup is off to the side of North Road heading south coming off the Lougheed Highway, and its quite easy to miss the turnoff into the space as the building is recessed a bit from the road.  The letdown was probably amplified by the small but near-full parking lot outside the establishment, which raised my hopes thinking that if it was busy then that was a good sign.  Opening the front door and scanning inside, the place was fairly busy and even after my dining companion and me were seated, a couple more groups of people came in.  I was sort of expecting more traditional floor-style seating, but it was just tables in the main space, and some more off to the side that were partitioned off by a barrier.  I’d say about 90% of the people there were Korean/speaking Korean, and was a mix of young groups of friends, older women, as well as some families.

As those familar with Korean cuisine know, after placing your order an assortment of free and refillable side dishes (banchan) are brought to your table.  Again, this was a letdown and was our second hint that things were not up to snuff.  The cabagge kimchi was not flavorful and was lacking real taste and heat, the sweet potato/onion was again lacking flavor, and the vinegar-flavored seaweed was stringy but lacking the chewy texture that I prefer.

Thinking that the soondubu alone would not fill us up (or rather me who was in a much more hungier state having skipped lunch), we decided to order an appetizer of fried mandoo (dumplings).  As a filler, I could accept that it was just a frozen product that was deep fried and perhaps in too hot an oil bath, and the insides were just passable on taste.  My usual dining companion cringes when I order things like this, and this was one occasion that I knew they were right. 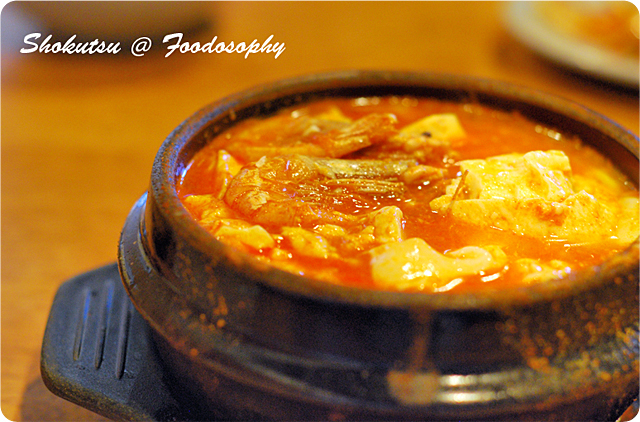 The mixed soondubu that I chose had both meat and seafood ingredients, along with an ample amount of soft tofu.  This last characteristic was the dish’s lone positive, as more often than not, many places will skimp out on the quality and quantity of tofu.  The other ingredients though, aside from the decent sized shrimp, were few and far between as I scrambled to dig out a few slices of beef, some tiny clams, bits of green onion and that was about it, from the bottom of the bowl.  As a result, none of the all important seafood flavor had incorporated itself into the broth, and now I realized why they had been generous with the tofu, perhaps an attempt to cover up the lack of a deep flavor in the soup?  With both of us unable to stomach even a half of the bowls, we had them dumped into containers to-go, and at home I tried to invigorate the flavor component of the broth by adding some clams and extra prawns, which helped a little, but probably at too late a stage in the cooking process to rectify the weakly flavored broth that I had to begin with for this reclamation project.

I hate to disparage a place based on one meal, but I am afraid if that meal is what is being advertised as the house special, then it better come fully locked and loaded.  Unfortunately, the soondubu at the House of Tofu Soup is as they say in the ad game, a complete bait-and-switch.

3 thoughts on “House of Tofu Soup – Burnaby, BC”