Brunch is one of those love/hate relationships for me. On the one hand, I would generally prefer to eat lunch and dinner foods at any time of day. Give me a nice bowl of Pho, a slice of cold pizza, or a great big burrito instead of bacon, eggs and toast any day.  On the other hand, im a real sucker for Eggs Benedict, and hash browns. What this means for me is the occasional foray out for Brunch. And it typically means im ordering the Eggs Benny.

New York Bagel Cafe existed in Edmonton at the corner of Whyte Avenue and Calgary Trail for many years. That was, until a tragic fire took out the Alberts, Pet store, and other establishments it shared a building with. They had a small but loyal following, and yet, were now homeless.

Down the street, a few blocks down, was a small mother-daughter sandwich shop that served up organic, sustainable foods, fresh local ingredients in the forms of sandwiches, salads and soups. Twig N Berries was an idea that was too early – before its time. It’s neighbour, the venerable Edmonton institution “Club Malibu”, did not attract the same kinds of crowds they were looking to target. Sadly, they closed their doors as well. This space, once vacated, became the new home to New York Bagel Cafe. The new space was twice as large, and some concern about their ability to reproduce their success from their previous location existed. Maybe the positive vibes that TNB started would be passed onto the NY Bagel Cafe.

Like a Phoenix fresh from the fire, New York Bagel Cafe came back as good as ever. First off, they have the best eggs benedict in town. Period. Start with a great selection of fixed benedicts – utilizing creative flavour combinations, combined with some seasonal variations. The base for the benedict is your choice of toasted bagel – a more hearty, and solid choice over the traditional english muffin. The eggs are perfectly poached. The hollandaise? Freshly made, stable and no where close to breaking. These large portions are served with the best hash browns, broiled, pan fried, seasoned potatoes that have the perfect combination of toothy and crunch. They are salty, but i like them that way. Lastly, comes an array of exotic fruits. Seasonal berries. Kiwi. Orange. Melon. Dragonfruit. Starfruit. The varieties are endless. And they are always fresh.

What else do they have? Omelettes and frittatas. Eggs and Bacon. Platters. The Montreal Smoked Meat platter is a particular favorite among many patrons. Eggs. Bagel. Smoked meat. Hash Browns. Fruit. Hard to go wrong with that, especially when you wake up two advil short of a lesser hangover. 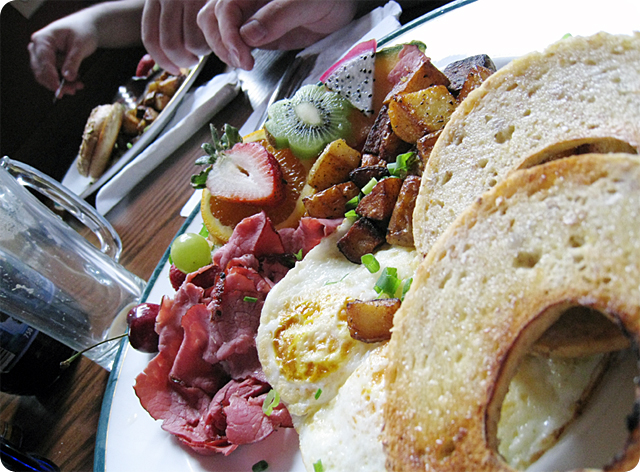 The new location is not without issues however. Food of this quality is made fresh to order. Resulting in painfully long waiting times – typically 60-70 minutes from the moment you order, to the moment you get your food. NY Bagel Cafe is also not much of a secret among the brunch crowd – there can be hour long lineups on weekends, just to get a table. Especially if you show up during the prime hours of 10:30am-1:00pm. They also do not have refillable coffee – making a European latte their “house coffee”. Lastly, they are not cheap. But these days, what is? If these are my biggest concerns regarding a breakfast establishment, I believe we have a winner.

At the end of the day, in most cases, I’d still prefer lunch and dinner foods over breakfast foods. But at any time before dinner, I will take an order of Eggs Benedict from New York Bagel Cafe. They are that good. And for those who know me, that is saying quite a lot.